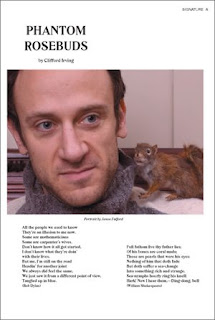 Phantom Rosebuds
by Clifford Irving
A Book Launch & Cocktail Party
Featuring art/stage acts by Mario Garcia Torres, Kevin Killian, Amy Robinson, Nicholas Matranga, Morten Norbye Halvorsen and more
May 10, 2008, 7-10 pm
The Prince
3198 W. 7th Street
Los Angeles, CA 90005
Phantom Rosebuds is a brand new autobiography of Clifford Irving, a controversial writer, lover, prisoner and film character. His 'signature' book chronicles a subjective trawl through a notorious history -- from his early years as a creative writing teacher, through the Howard Hughes scandal, right up to the moment of the author's appearance in his own narrative. A considerable section of the story is dedicated to Clifford Irving's role in F for Fake, the 1972 film by Orson Welles about illusion, techniques of conviction and the speculative value of art.
Posted by A Maxwell at 5:16 PM

centos or ubuntu for vps

how to get customer id in canara bank

how to add beneficiary in uco bank to uco bank