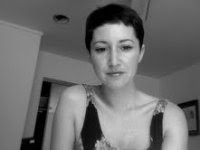 JOEL LEWIS is the author of Learning From New Jersey (2007), Tasks Of The Youth Leagues (2006) , Vertical’s Currency (1999) and House Rent Boogie (1992). He edited Bluestones and Salt Hay, an anthology of contemporary NJ poets, as well as editing the Reality Prime, the selected poems of Walter Lowenfels and On The Level Everyday: the selected talks of Ted Berrigan. He has also written hundreds of articles, reviews, essays and profiles and currently is a staff writer at the New Jersey Performing Arts Center in Newark. A social worker by day, he has taught creative writing at the Poetry Project, The Writer’s Voice and Rutgers University. And, for better or worse, he initiated the ill-fated New Jersey Poet Laureate position that was such a headache for Amiri Baraka. With his wife, film theorist Sandy Flitterman-Lewis, he resides in Hoboken.

SOPHIE SILLS recently relocated from San Francisco to Los Angeles after earning her MFA in Creative Writing at Mills College. Here, she writes poetry and literary criticism. She works for a Jewish Non-profit and teaches English at National University. She lives with her cat and she is happy. login to icloud from ipad

how to add beneficiary in canara bank net banking