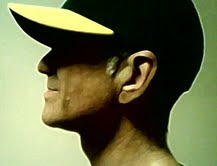 Of Glowball, Sianne Ngai says: "Is the word 'glow' now permanently ominous? What is the future of aesthetic enchantment in the society of the spectacle? In a book where poems become exploding dandelion heads of the spreadsheet and situation room, Steve Farmer radically estranges us from our present as if it were the future’s past. Glowball est a praeclarus quod perago libri."

There is a line in Glowball about Glendale. This will be Farmer's first visit to Glendale.

Thom Donovan lives in NYC where he edits Wild Horses of Fire weblog (whof.blogspot.com) and coedits ON Contemporary Practice. He is a participant in the Nonsite Collective and a curator for the SEGUE reading series. His criticism and poetry have been published widely in BOMB, PAJ: performance + art, Modern Painters, The Brooklyn Rail, and at the Poetry Foundation's Harriet blog. Currently he is working on a book of criticism, Sovereignty and US: Critical Objects 2005-2010, and on the Project for an Archive of the Future Anterior (with Sreshta Rit Premnath). His book The Hole is forthcoming with Displaced Press.
Posted by Joseph at 2:20 PM

how to add beneficiary in canara bank