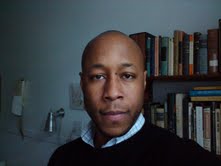 Christopher Stackhouse is a writer, curator, and visual artist. He has worked in several media and disciplines including film and video, music recording, theater, painting and drawing. He is the author of Slip (Corollary Press, 2005); and is co-author of image/text collaboration with writer/translator John Keene, Seismosis (1913 press, 2006), which features Stackhouse’s drawings in philosophical discourse with Keene’s texts. His poems have been published in several in literary journals including EOAGH, Octopus, GlitterPony, Aufgabe, Hambone, nocturnes (re)view of literary arts, and The Recluse. Fellowships and awards include Cave Canem Writer Fellow (1997,1999, 2003); Fellow in Poetry, New York Foundation for the Arts (2005); Pocantico Residency at the Marcel Breuer House, Rockefeller Brothers Fund For The Arts (2009). His essays and reviews have appeared in the literary journal American Poet- The Journal of The Academy of American Poets, The Poetry Project Newsletter, A Best of Fence: The First Nine Years Volume 1 Poetry & Non-Fiction; and in arts periodicals Modern Painters, Art In America, and NY Arts Magazine, among other publications. He is an advisory board member at FENCE Magazine, a contributing editor at BOMB Magazine, and a contributing poetry editor at VANITAS Magazine. He has a book of poems forthcoming from Counterpath Press (Denver, CO), and a collection of various texts on art, writing, and culture forthcoming from Sand Paper Press (Key West, FL).

John Keene is the author of Annotations (New Directions) and, with artist Christopher Stackhouse, of the art-text dialogue Seismosis (1913 Press). He has published his poetry, fiction, essays, and translations widely, and has received many honors, including a Whiting Foundation Writers Award and fellowships from the state arts councils of New Jersey and Massachusetts. He divides his time between the northeast and midwest, and teaches at Northwestern University.