After opening the season with a swell reading at Charlie James with P-Gizzi, the PRB returns to its cozy niche in the Public School just a few doors down at 951 Chung King Road in Chinatown. We welcome Daniel Borzutzky, out from Chicago, and Tisa Bryant, from our own up-in-the-ether, down-in-the-jowls megalopolis. Hope to see you all this weekend before the fog rolls in. 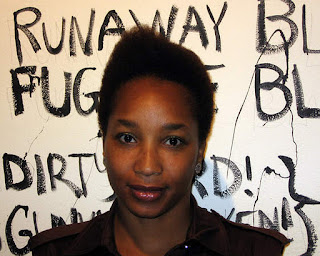 Tisa Bryant is the author of Unexplained Presence (Leon Works, 2007). An excerpt from her novella, [the curator], was published by Belladonna Books in 2009, in a companion volume with writer Chris Kraus. She is also the author of the chapbook, Tzimmes (A+Bend Press, 2000), a prose poem collage of narratives including a Barbados genealogy, a Passover seder and a film by Yvonne Rainer. She is co-editor, with Ernest Hardy, of War Diaries, an anthology of black gay male desire and survival, from AIDS Project Los Angeles, which was nominated Best LGBTQ anthology by the LAMBDA Literary Awards. She is also co-editor/publisher of the hardcover cross-referenced literary/arts series, The Encyclopedia Project, which recently released Encyclopedia Vol. 2 F-K. She lives in Los Angeles.

Daniel Borzutzky is the author of The Book of Interfering Bodies (Nightboat, 2011); The Ecstasy of Capitulation (BlazeVox, 2007) and Arbitrary Tales (Triple Press, 2005). His translations include Raúl Zurita's Song for his Disappeared Love (Action Books, 2010) Jaime Luis Huenún's Port Trakl (Action Books, 2010), and One Year and other stories by Juan Emar (Review of Contemporary Fiction, 2007). His work has been anthologized in, among others, A Best of Fence: The First Nine Years (Fence Books); Seriously Funny (University of Georgia Press, 2010); and Malditos Latinos Malditos Sudacas: Poesia Iberoamericana Made in USA (El billar de Lucrecia, 2010). Journal publications include Fence, Denver Quarterly, Conjunctions, Chicago Review, TriQuarterly, and many others. Chapbooks include Failure in the Imagination (Bronze Skull, 2007) and One Size Fits All (Scantily Class Press, 2009). He is a contributing editor to Mandorla: New Writing from the Americas. He lives in Chicago.