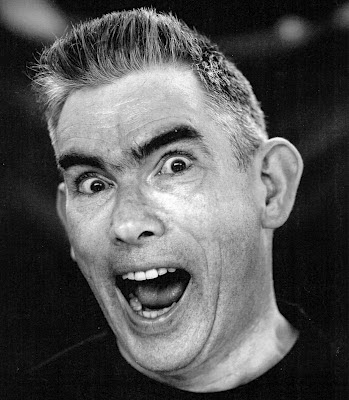 Punxsutawney Phil may have predicted 6 more weeks of winter back in Penn's Woods, but out here on the New Coast spring has sprung (we reject groundhogs; we prefer our resident wild dog, John the Wolf King of LA).

Jaap will be holding a sound poetry workshop the following afternoon.

VOICE/TEXT-SOUND/IMPROVISATION
A workshop by Jaap Blonk

A workshop for vocalists and performers who want to explore the inner depths and outer reaches of voice, text, music and sound in an exploratory improvisational framework. We will work in a playful way, using games and improvisational structures. Sometimes we will use short sound poems from the history of that genre and work on interpretations of them.

On the way, we will encounter and practice many extended vocal techniques.

Depending on participants' interests and wishes, we can also go into notation possibilities and writing strategies.

Some vocal ability and the willingness to improvise and explore, are the only prerequisites.


Jaap Blonk (born 1953 in Woerden, Holland) is a self-taught composer, performer and poet. He went to university for mathematics and musicology but did not finish those studies. In the late 1970s he took up saxophone and started to compose music. A few years later he discovered his potential as a vocal performer, at first in reciting poetry and later on in improvisations and his own compositions. For almost two decades the voice was his main means for the discovery and development of new sounds. From around the year 2000 on Blonk started work with electronics, at first using samples of his own voice, then extending the field to include pure sound synthesis as well. He took a year off of performing in 2006. As a result, his renewed interest in mathematics made him start a research of the possibilities of algorithmic composition for the creation of music, visual animation and poetry.