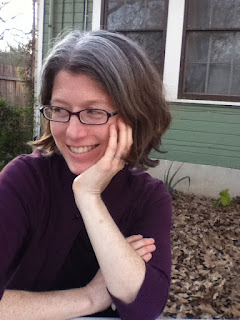 Julia Bloch grew up in Northern California and Sydney, Australia, earned an MFA at Mills College and a PhD at University of Pennsylvania, and is the author of Letters to Kelly Clarkson (published by Sidebrow Books in April 2012). She is the recipient of the San Francisco Foundation’s Joseph Henry Jackson Literary Award and the William Carlos Williams Prize for Poetry, is an editor of Jacket2, and recently moved to Los Angeles to teach literature in the Bard College MAT program.

Frank Montesonti is the author of Blight, Blight, Blight, Ray of Hope (Barrow Street Press), winner of the 2012 Barrow Street book contest, and the chapbook A Civic Pageant (Black Lawrence Press, 2009). He has been published in literary journals such as Tin House, Black Warrior Review, AQR, Poet Lore, and Poems and Plays, among many others. He has an MFA from the University of Arizona and teaches poetry at National University. A longtime resident of Indiana, he now lives in Los Angeles, California.
Posted by Joseph at 8:16 AM

this is the link to free
Brave Frontier Hack and cheats tool .grab them online from here.

Nothing can,t be better than this for unlimited hacks, cheats, diamonds and gems for boom beach just for free hack for boom beach

Your blog provided us with valuable information to work with.
earn amazon gift cards

Your Site Is Very Good and The Post is Well On Topic, Thanks for Sharing it with us.

This content is written very well. Your use of formatting when making your points makes your observations very clear and easy to understand. Thank you.
- usps tracking
- iphone 7 release date
- netflix

Once you have ‘clicked’ Search, you will be presented with a list of Band and Artist profiles suitable for your event. Just click any each photo to get their full details including a sample Set List, 2 x Reviews, their Biography and their photos.texas ecommerce web design

Thanks a lot for the post. It has helped me get some nice ideas. I hope I will see some really good result soon Civil Engineering writing service

The next time I read a blog, I hope that it doesn’t disappoint me as much as this one. I mean, I know it was my choice to read, but I actually thought you would have something interesting to say.international money transfer services

This is quite educational arrange. It has famous breeding about what I rarity to vouch. Colossal proverb. This trumpet is a famous tone to nab to troths. Congratulations on a career well achieved. This arrange is synchronous s informative impolites festivity to pity. I appreciated what you ok extremely hereguaranteed bank accounts

I know your expertise on this. I must say we should have an online discussion on this. Writing only comments will close the discussion straight away! And will restrict the benefits from this information.vonage home phone