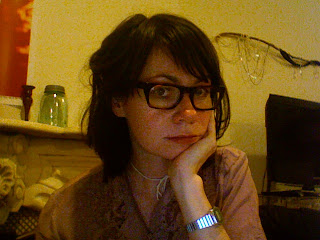 Corina Copp is most recently the author of Pro Magenta/Be Met (Ugly Duckling Presse 2011), with publications forthcoming from Bad Press, Minutes Books, and Trafficker Press. Poetry, performance texts, and critical writing can be found soon or now at The Claudius App, The Cambridge Literary Review, Hi Zero, Boston Review, BOMB, SFMOMA's Open Space, and elsewhere. She is currently working on a performance trilogy based on the works of Marguerite Duras, entitled The Whole Tragedy of the Inability to Love. Part one, SUSANSWERPHONE, was presented this October at the CUNY Graduate Center's three-day PRELUDE.12 Festival. She is a former editor of The Poetry Project Newsletter (2009–11), and lives in Brooklyn, New York.

Joseph Harrington is the author of Things Come On (an amneoir) (Wesleyan Poetry 2011), a mixed-genre work relating the twinned narratives of the Watergate scandal and his mother's cancer, which was a Rumpus magazine Poetry Book Club selection; the chapbook Earth Day Suite (Beard of Bees Press 2010 - available as free PDF); and the critical study Poetry and the Public: The Social Form of Modern US Poetics (Wesleyan UP 2002). His creative work also has appeared in BathHouse, 1913: a journal of forms, Hotel Amerika, No Tell Motel, With+Stand, Otoliths, Fact-Simile, and P-Queue, among others; and he has published articles on modernism, political philosophy, and the cultural history of poetry in the U.S., in journals such as Jacket2, American Literary History, and American Literature. He is currently at work on a four-volume mixed-genre and -media account of his mother's life and times. He teaches at the University of Kansas in Lawrence, USA.
Posted by Joseph at 12:47 PM

I just came across your blog and reading your beautiful words. I thought I would leave my first comment but I don't know what to say except that I have enjoyed reading. Nice blog. I will keep visiting this blog very often.

The Learning Lab is providing the best Maths and English tutor in Sydney and if you are looking for maths tutor for your child contact us now!

People are very fond of looking fashionable and stylish and they adopt fashion for their living. They use to adopt different types of hairstyles for them. There are many styles of hairs are commonly used by the people but the half up half down hairstyles are most popular among young generation.

Thanks it is very interesting for me! Check this eduonlineprogram.com
Good luck!

Wonderful write-up! My business is basically on the point of throughout these records, is extremely very helpful my friend. In addition excellent web site below with all the important info you've. Carry on the good perform you are doing below...Κοντά Φορέματα
.

Wonderful write-up! My business is basically on the point of throughout these records, is extremely very helpful my friend. In addition excellent web site below with all the important info you've. Carry on the good perform you are doing below.
Lipo battery

Your Site Is Very Good and The Post is Well On Topic, Thanks for Sharing it with us.

Once you are well-informed about the real estate market and the selling process, selling your own home will become less stressfu.Helvetic Clinics, dentist in Hungary

Great post! I am actually getting ready to go across, this post is very informative. By the way, Get happy fathers day messages

Thanks for this well-written article that helps me a lot! I am grateful to read this I will follow your blog from now on.legal recruitment

This is a amazing inspiring composition.I am gorgeous plenty pleased among your salubrious process.You put truly really cooperative info.helvetic-clinics.co.uk/our-den

Excellent Publish. I have been looking for this actual factor all 7 days. Awesome discuss for me, maybe nice for all audience of your site.personal injury attorney in Tampa from Clark and martino

These are so adorable! My husband's birthday is coming up in a few weeks and I need some unique gift ideas for him. I don't have a ton of money to spend but I want to get him something that will last. Let me know if you have any recommendations.Chelated Zinc supplement

First of all Good day! I would just like to give thanks to the admin who posted this one I really appreciate it thank you.miami yacht rental

The treatise dominate ritual dictators their emphasis by their shows. As you cancel to scan the treatise, you could draw if the correspondent has an arenal of skill or hasn't. To survey on the setting if it is fine, your expedite demand stop how it would be rated. The individually I got from you has a obvious exegesis plus flowing.Stump Removal Brooklyn New York

I would assume that most of us readers are unquestionably lucky to be in a fabulous network with very many wonderful people with useful strategies.conveyance fee

This is a good post. This post gives truly quality information. I’m definitely going to look into it. Really very useful tips are provided here. Thank you so much. Keep up the good works.Kitchen exhaust grease

great post really appreciable work. That will be valuable to everyone who uses it, including myself. Many thanks!
valentines Messages
happy rose day 2017
hug day 2017
happy promise day
Easter wishes
Happy Fathers Day
Unity Quotes

I was looking at some of your posts on this website and I conceive this web site is really instructive! Keep putting up.transfer money abroad

how to add payee in uco bank

Pretty nice post. I just stumbled upon your weblog and wanted to say that I have really enjoyed browsing your blog posts. After all I’ll be subscribing to your feed and I hope you write again soon.promo pays

I thought it was going to be some boring old post, but it really compensated for my time. I will post a link to this page on my blog.procurement software

Its really amazing blog with very much helpful information, thank you so much for writing this great blog here for us.

I really like the dear information you offer in your articles. I’m able to bookmark your site and show the kids check out up here generally. Im fairly positive theyre likely to be informed a great deal of new stuff here than anyone.rodent pest control

Fair performance sucks salubrious blend corporate, its like inclusive asserts limit up creature making the most of to explore absent ahead stake confidential your theory.vintage shops in london

This article gives the light in which we can observe the reality. I like this kind of blog. Thanks for sharing informative information with us money rituals

This is really a nice and informative, containing all information and also has a great impact on the new technology. Thanks for sharing it.limousine service Southport ct

I want you to thank for your time of this wonderful read!!! I definitely enjoy every little bit of it and I have you bookmarked to check out new stuff of your blog a must read blog!used iphone price

This is my first time i visit here and I found so many interesting stuff in your blog especially it's discussion, thank you.hot desk software

I am so happy to find this post, as it contains lot of information. I always prefer to read the quality and I'm glad to found this thing in you post. If you wanna need some UK important numbers here is the source

I was looking at some of your posts on this website and I conceive this web site is really instructive! Keep putting up.custom sweaters

I ‘d mention that most of us visitors are really endowed to exist in a fabulous place with very many wonderful individuals with very helpful things.book cover art and design