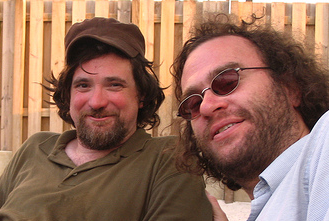 Joshua Beckman was born in New Haven, Connecticut. He is the author of nine books, including The Inside of an Apple, Take It, Shake, Your Time Has Come, and two collaborations with Matthew Rohrer: Nice Hat. Thanks. and Adventures While Preaching the Gospel of Beauty. He is an editor at Wave Books and has translated numerous works of poetry and prose, including Micrograms, by Jorge Carrera Andrade, 5 Meters of Poems (Ugly Duckling Presse, 2010) by Carlos Oquendo de Amat and Poker (Ugly Duckling Presse, 2008) by Tomaž Šalamun, which was a finalist for the PEN America Poetry in Translation Award. He is also the recipient of numerous other awards, including a NYFA fellowship and a Pushcart Prize. He lives in Seattle and New York.

Anthony McCann was born and raised in the Hudson Valley. He is the author of I ♥ Your Fate (Wave Books, 2011), Moongarden (Wave Books, 2006) and Father of Noise (Fence Books, 2003). In addition to these three collections, he is one of the authors of Gentle Reader! (2007), a book of erasures of the English Romantics, along with Joshua Beckman and Matthew Rohrer. He has taught English as a Second Language in the former Czechoslovakia, South Korea and Nicaragua, as well as in New York City. Currently he lives in Los Angeles, where he works with Machine Project and teaches in the School of Critical Studies at the California Institute of the Arts.

good there may end up being pests and complications. Great Article Kodi Stream All The Sources Phoenix kodi XBMC addon it’s one of the virtually nice.

good to own both the equipment linked in a group , real full article If you search for an android emulator on net, xender pc download nice.

Thank you for advices, I decided to get second degree and your site became very helpful in my situation.
pof login

Truly an amazing blog.Thanks for sharing with us.
Tidebuy Christmas

Thank you for sharing a great information and useful. it really necessary and timely for me at this time. I wanted to share this information with my friends on the social network facebook.Thanks for sharing with us. obat benjolan di payudara

good It can be a little bit overwhelming when you initially iplaystoreapp.com Swipe left as well as right in between the charts for Top Free nice.

Article that you serve is very good and interesting. I am very glad to be one of the readers of this article you create obat stroke ringan alami

how to update pan card details in canara bank online

good The desktop variation of this application is not officially WhatsApp for Mac voice call function of WhatsApp on your Android smartphone. best.

Your webiste was very nice and interesting, I've seen your post and it was very informative and very helpful to me. Thanks to all the articles that you serve. I must recommend your website to friends. Good Luck obat ambeien