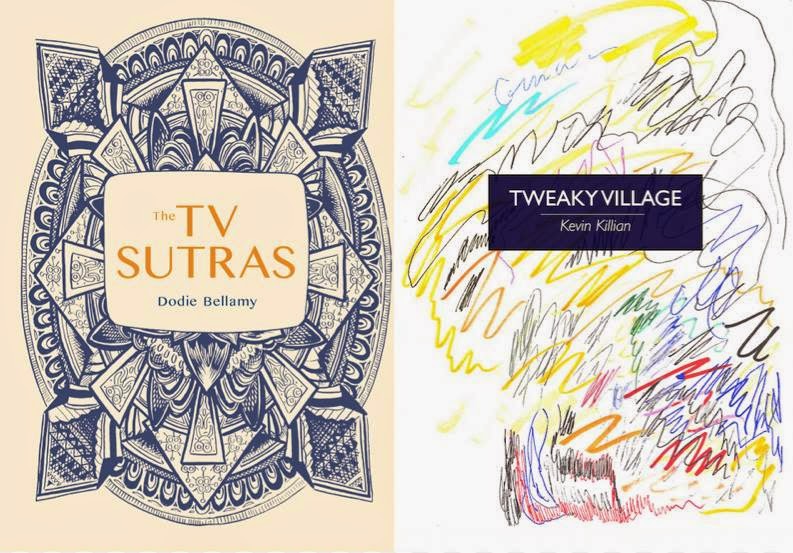 Dodie Bellamy is a novelist, poet, and essayist. Her most recent book is The TV Sutras (Ugly Duckling Presse, 2014). Her Ugly Duckling chapbook Barf Manifesto was named best book of 2009 under 30 pages by Time Out New York. Other books include Cunt Norton, the buddhist, Academonia, Pink Steam,The Letters of Mina Harker, and Cunt-Ups, which won the 2002 Firecracker Alternative Book Award for poetry. Her reflections on the Occupy Oakland movement, “The Beating of Our Hearts,” was published as a chapbook in conjunction with the 2014 Whitney Biennial. With Kevin Killian she is editing for Nightboat Books New Narrative: 1975-1995. When the Sick Rule the World, her third collection of essays, is forthcoming from Semiotext(e).

Kevin Killian, one of the original “New Narrative” writers, has written three novels, Shy (1989), Arctic Summer (1997), and Spreadeagle (2012), a book of memoirs , and three books of stories. He has also written two books of poetry, Argento Series (2001), Action Kylie (2008), and Tweaky Village (2014). With Peter Gizzi he has edited My Vocabulary Did This To Me: The Collected Poetry of Jack Spicer (2008)—for Wesleyan University Press. Wesleyan also brought out Killian and Lew Ellingham’s acclaimed biography of Spicer in 1998. Recent projects include The Kenning Anthology of Poets Theater 1945-1985, edited with David Brazil; Tagged (2013), Killian’s intimate photographs of poets, artists, writers, musicians, filmmakers and intellectuals; and forthcoming, with Dodie Bellamy, The Nightboat Anthology of New Narrative Writing 1975-1995. He teaches writing to MFA students at California College of the Arts in San Francisco. Saturday, June 21 2014

good It is, however, ideal to utilize Snapchat suitable gadgets snapchatonlinelogine Here the snaps that are shared in the recipient's nice.