To celebrate the launch of their recent respective publications, please join John Paul Ricco, Nasrin Himada, and Etienne Turpin on Tuesday at 7pm for a conversation on the ethics and politics of unbecoming. Within this theoretical framework, and in relation to various scenes, topics will include: violence, sex, intimacy, brutality, sharing, extinction, pleasure, animality, loss, mourning, confinement, and bodies. 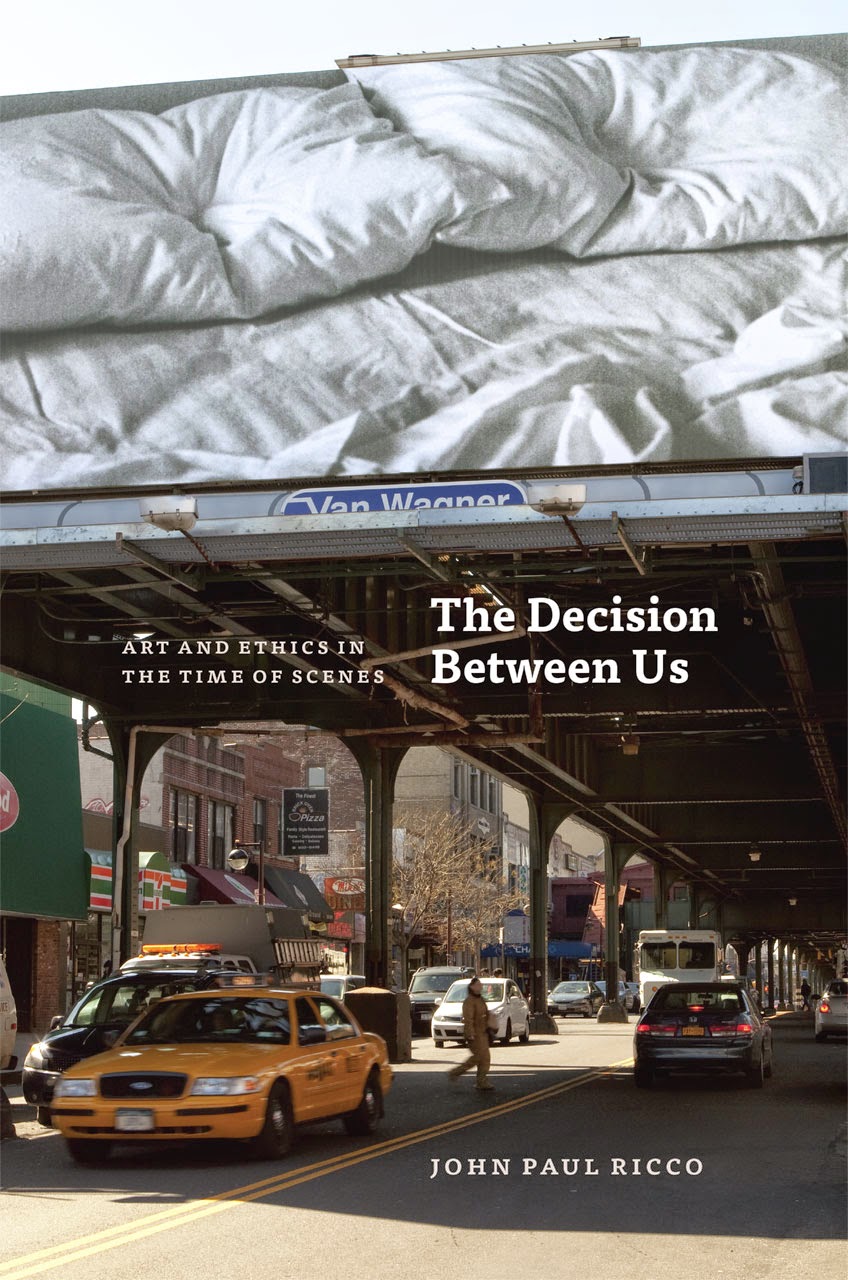 John Paul Ricco is an Associate Professor of Contemporary Art, Media Theory, and Culture in the Department of Visual Studies in the Centre for Comparative Literature, at the University of Toronto, Canada. Ricco's most recent book, The Decision Between Us, combines an inventive reading of Jean-Luc Nancy with queer theoretical concerns to argue that while scenes of intimacy are spaces of sharing, they are also spaces of separation." http://www.press.uchicago.edu/ucp/books/book/chicago/D/bo17577653.html

Nasrin Himada holds a post-doctoral research fellowship in Communications at the Université de Montréal and is a visiting scholar in the Aesthetics and Politics program at CalArts. http://scapegoatjournal.org/

Etienne Turpin is a philosopher living and working in Jakarta, Indonesia, where he is the director of anexact office. http://anexact.org/

Join us Thursday and Friday nights for a ton of visitors from all-over-the-damn-place. They're all in SoCal for the &Now conference at CalArts, and we're bringing them down from the desert into the center of the blast radius, Downtown LA, to read for you townies.

Dig if you will this picture:

Carlos Soto-Román is a poet and translator. A former resident of Philadelphia, PA he now hails from Santiago, Chile. He has published in Chile: La Marcha de los Quiltros (1999), Haikú Minero (2007), Cambio y Fuera (2009), and in the US: Philadelphia’s Notebooks (Otoliths, 2011), Chile Project: [Re-classified] (Gauss-PDF, 2013), Alternative Set of Procedures (Corollary Press, 2014) and The Exit Strategy (Belladonna, 2014). As a translator he published an expanded Spanish edition of Do or DIY (Das Kapital, 2013), a collective essay written by Craig Dworkin, Simon Morris, and Nick Thurston, and recently, a translation of Ron Silliman’s BART (Cuadro de Tiza, 2004). He is the curator of the cooperative anthology of contemporary US poetry Elective Affinities.

Andy Fitch’s most recent books are Sixty Morning Walks, Sixty Morning Talks and (with Amaranth Borsuk) As We Know. Ugly Duckling soon will release his ebook Sixty Morning Walks. With Cristiana Baik, he is currently assembling the Letter Machine Book of Interviews. He has dialogic books forthcoming from 1913 Press and Nightboat Books. He edits Essay Press and teaches in the University of Wyoming’s MFA program.

Amaranth Borsuk is the author of Handiwork (Slope Editions, 2012), and, with Brad Bouse, Between Page and Screen (Siglio Press, 2012). Abra, a collaboration with Kate Durbin forthcoming from 1913 Press, recently received an NEA-sponsored Expanded Artists’ Books grant from the Center for Book and Paper Arts at Columbia College Chicago and will be issued as an artist’s book with an iPad app created by Ian Hatcher. Her collaborative digital projects include an erasure bookmarklet, The Deletionist, with Nick Montfort and Jesper Juul, and Whispering Galleries, a site-specific LeapMotion erasure work for the city of New Haven. Another collection of poems is forthcoming from Kore Press. Amaranth is an Assistant Professor of Interdisciplinary Arts and Sciences at the University of Washington, Bothell, where she also teaches in the MFA in Creative Writing and Poetics.

Laynie Browne is the author of eleven collections of poetry and two novels. Her most recent collection of poems Scorpyn Odes, is just out from Kore Press. Other recent books include Lost Parkour Ps(alms) in two editions, one in English, and another in French, from Presses universitaires de Rouen et du Havré (2014). She is a 2014 Pew Fellow. Forthcoming books include P R A C T I C E (SplitLevel Texts). She teaches at University of Pennsylvania and Swarthmore College.

Dan Beachy-Quick is a poet, essayist and occasional novelist. His most recent book is A Brighter Word Than Bright: Keats at Work. A new collection of poetry, gentlessness, and a chapbook, Shields & Shards & Stitches & Songs will appear this spring. He's a Monfort Professor at Colorado State University, where he teaches in the MFA Writing Program.

Katy Bohinc is the author of Dear Alain, love letters of a poet to a philosopher, addressed to Alain Badiou. As irreducible a work as any poet would antagonize a philosopher with, yet also a metaphor for Badiou's thought, who responds himself in the afternote. Bohinc demonstrates how Love, Politics, Math and Poetry are conditions on Philosophy, sexual metaphors intended, and poetry is everything. Slavoj Zizek writes: "This book should be banished!" She lives in New York City, is the director of Tender Buttons Press and recently edited Please Add To This List: A Guide to Teaching Bernadette Mayer's Sonnets & Experiments. Work has appeared in Poor Claudia, The Capilano Review, Elderly, Armed Cell & others. She is working on a new book: THE COMMUNITY.

Carla Harryman is he author of seventeen books of poetry, prose, and works for performance including W— /M—(2013), Adorno’s Noise (2008), Gardener of Stars (2001), and Animal Instincts: Prose, Plays, Essays (1989). Her collaborative works include the multi-authored work The Grand Piano, an Experiment in Autobiography: San Francisco, 1975-1980 and The Wide Road (with Lyn Hejinian). Open Box (with Jon Raskin), a CD of music and text performances was released on the Tzadik label in 2012. Her Poets Theater, interdisciplinary, and bi-lingual performances have been presented nationally and internationally. She is the editor of two critical volumes: Non/Narrative, a special issue of the Journal of Narrative Theory, and Lust for Life: On the Writings of Kathy Acker (with Avital Ronell and Amy Shoulder). She serves on the faculty of the Department of English Language and Literature at Eastern Michigan University and on the summer faculty of the Milton Avery School of the Arts at Bard College.

Nikki Darling is a student in the Creative Writing/Literature PhD program at USC. Her poetry, performance, and experimental essays are based around subjectivity, persona, and post-structuralist methods of deconstructing literary form and meaning. She is a columnist at KCET Artbound and is currently finishing her first novel, Fade Into You, a story of mixed-race identity in the San Gabriel Valley during the 1990s. Her criticism has appeared in the Los Angeles Times, LA Weekly, Art Book Review, Tomorrow Magazine, and Public Books, among others. Her essay “Appropriate For Destruction” was included in Best Music Writing 2010. 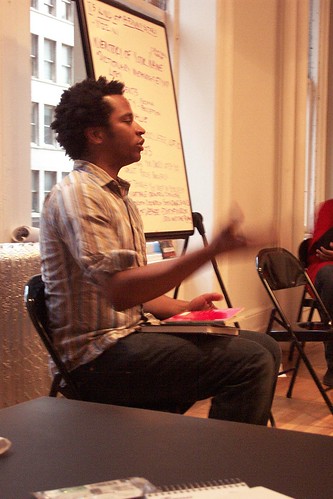 Jibade-Khalil Huffman is an artist and the author of three books of poems: 19 Names For Our Band (2008), James Brown is Dead (2011), and Sleeper Hold (2015). His art and writing projects, which span performance, photography, poetry, and video, have been presented at galleries and museums, including MoMA/PS1, Marianne Boesky and the Hammer Museum as part of Made in LA 2014.

Allison Carter is the author of A Fixed, Formal Arrangement (Les Figues Press) and Here Versus Elsewhere (Insert Blanc Press) as well as several shorter collections, including Sum Total (Eohippus Labs), All Bodies Are The Same and Have The Same Reactions (Blanc Press), Shadows Are Weather (Horse Less Press), and We All Are Afraid of Repeating Mistakes That I Have Already Made: Breakfast Poems (Dancing Girl Press). Her work has also been included in Fence, Diagram, Conjunctions, and other journals. Allison works as a mental health professional, and brings creative writing workshops and opportunities into mental health settings, including Skid Row and inpatient psychiatric facilities. Allison lives in LA with her fiance and her medium sized dog, Little Cowboy.

Sandra Doller has published four books, two chapbooks, and two collaborations. Her most recent work includes Leave Your Body Behind, forthcoming from Les Figues in May 2015; The Yesterday Project with Ben Doller, forthcoming from Sidebrow in September 2015; and bits of improvised text and performance coming at you all the time. Her other kind of writing focuses on text-image-performance, anti-disciplinarity, and conversations between art forms. Doller completed her MA at University of Chicago and her MFA at the Iowa Writers’ Workshop, and she is currently an Associate Professor at California State University-San Marcos. The founder & editrice of 1913 Press & 1913 a journal of forms, Doller lives in San Diego and Joshua Tree with man and dogs.