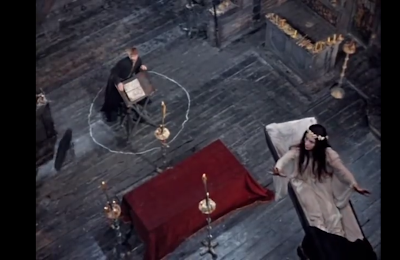 The eighth edition of @SEA, the Poetic Research Bureau's monthly live magazine, concludes its spring season with a calling down of the theme of curses: bad luck, bad lots, hexes and misfortune; low speech, profanities, brought down trouble and malediction. A quartet of ensorcellement at 951 Chung King Rd in Chinatown!


Laura Kraning’s moving image work navigates landscape as a repository for memory, cultural mythology, and the technological sublime. Exploring absence and the fluidity of time, she evokes liminal spaces of neither past, nor present, but a landscape of the imagination. Laura’s work has screened widely at international film festivals, such as New York, Rotterdam, Edinburgh, San Francisco, Ann Arbor, Antimatter, Visions du Réel, and Festival du Nouveau Cinema, among others.  Laura currently teaches in the Program in Film and Video at California Institute of the Arts. Tracing the metaphysical undercurrents of a Southern California landscape scarred by fire, her film Devil's Gate unearths a subconscious of the landscape, as the echoes of the past reverberate in the present and infect our perception and experience of place.

Laura Moriarty lives in the East Bay. Her recent books are Fugitive Notebook from Couch Press, Who That Divines and A Tonalist, from Nightboat, A Semblance, Selected Poetry 1976-2007 from Omnidawn and the novel Ultravioleta from Atelos. She has taught at Mills College, Naropa University and elsewhere and is currently Deputy Director of Small Press Distribution.

Jessica Sequeira, originally from California, attended Harvard and Cambridge, and now lives in Buenos Aires. She has published essays, stories and translations in The Boston Review, Los Angeles Review of Books, ReVista: Harvard Review of Latin America, Modern Poetry in Translation, Berfrois, Litro Magazine, Palabras Errantes, The Missing Slate, Ventana Latina and other publications. Her version of the Bolivian writer Liliana Colanzi's short stories will be published by Dalkey Archive Press later this year, and her collection of Bolivian poetry is out with Smokestack Books in 2017.

Ben White is an artist who lives and works in Los Angeles and is host of art and culture show "The People" on KCHUNG radio 1630AM. Take Away Their Victory is a performance exercise in ancient world curses and binding spells, and will allow an opportunity for viewers to ostracize a member of the Los Angeles community for ten years.

hey guys now you will get free itunes code here

This is really an awesome website. I have seen many websites but this one is awesome.
Types of Market Research Help

Excellent post. This is a very good blog that I will definitively come back
Electrical Project Help

Another incredible post, I value all the work you put into this site, assisting others with your fun and inventive works.
Niagara Health System: An Innovative Communications Strategy (A) Case Solution

A great possibility for me and it was a superb knowledge to view this site. Very difficult to uncover these beneficial web page or web site. I have many devices and achieving proper picture of these worked well and energy continues to be seeing about this weblog. Often my own intend to make my personal site as well as my own enjoyment is growing due to this page. I we do hope you may well be more effective.
list of emoticons | facebook lite |
excel | gta 5

pc optimizer announcing the latest blog of solve a system regarding issue.

registry cleaner free is a tools of protect your system privacy.

Hi mate, Iam very thankful to you and Tq so much for interesting stuff, i will be waiting for the next post Gandhi Jayanti Speech

I always read your all blog, because their are always helping to my study. Thanks for share with us.
Call Girls Services in Manali

its a nice and good article so, please

send me some more information about

I glad to be here read this more informative article, i just need it.
Gurgaon Best Escorts Services

The information provide by you is very useful for me.thanks for sharing and hope you will share again.
Bangalore High Profile Escorts

Its really commendable effort by your team. Really impressive effort. Awesome blog really helpful for us. Glad you shared this with us.
Tricksmode.com

how to register mobile number in andhra bank

Wow you did a good job here, That Bridal mantel was incredible. Keep it up, Good work over all.
Cheapest Call Girls Services in Delhi


thanks for sharing this wonderful post.
Today Palm Astrology

how to setup apache virtual hosts on ubuntu 16.04

Nice website, the site is very interesting, a lot of helpful articles and the latest news that arouse interest. nice!
Escort Service Gurgaon

Thanks For Sharing this information
netgear router tech support number

Several reading series are hosted at 951 CKR, and we welcome writers whose work lacks the 'commercial tendency' while harboring the bright, high-minded intentions that often lead to broad panic, righteous perversions, improbable arguments, and the ill-served cul-de-sacs of genius. The series are coordinated by the aforementioned Messrs Maxwell and Mosconi. If you're sympatico, passing through town, or need a megaphone, 50 seats and a big blank space, give us a write.