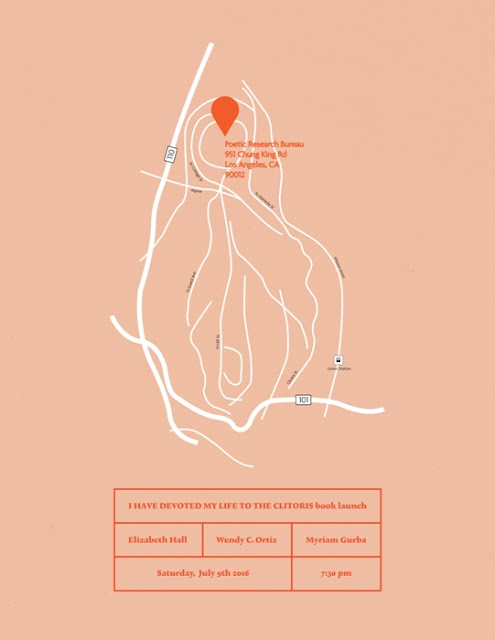 Elizabeth Hall was born in Louisiana and raised in Georgia. She is the author of the book I HAVE DEVOTED MY LIFE TO THE CLITORIS (Tarpaulin Sky Press) and the chapbook Two Essays (eohippus labs). She currently lives in San Pedro, California where she plays bass with the band Pine Family.

A native Californian, Myriam Gurba earned a BA with honors from UC Berkeley. Her first book, Dahlia Season, won the Publishing Triangle's Edmund White Award for Debut Fiction and was a Lambda Literary Award finalist. She is also the author of Wish You Were Me (Future Tense), menudo & Herb (self-published), and A White Girl Named Shaquanda (self-published). She blogs at lesbrain and often for The Rumpus and Radar Productions.

Wendy C. Ortiz is a Los Angeles native. She is the author of EXCAVATION: A MEMOIR (Future Tense Books, 2014), HOLLYWOOD NOTEBOOK (Writ Large Press, 2015), and the forthcoming BRUJA (Civil Coping Mechanisms, late 2016). She wrote the year-long, monthly column "On the Trail of Mary Jane" about medical marijuana dispensary culture in Southern California for McSweeney's Internet Tendency. Wendy was co-founder and curator of the Rhapsodomancy Reading Series between 2001 and 2015.

The leading assignment help UK firm offers state of the art services to its clients with a promise of delivering all the required work well within the deadline.
Student Essay Writing Service

I appreciate your blog its a interesting and it attract other peoples to read this blog..
Electrical Assignment Help

Value of Market Research Assignment Help
I like it when individuals get together and share thoughts. Great blog, continue the good work!

I want to thank you for this enlightening read, I really appreciate sharing this great post. Keep up the good work.
packing machine

No doubt! It will be truly hard enrolling! I wish you good fortunes!
Starbucks: A Crack In The Mug Case Solution

it is awesome article for me about bathroom exhaust fan, i think this is awesome blog, and i just bookmark it for using next time

This article help me to have more information about 144Hz monitor, i just bookmark it and love it soo much

It is useful information for the outdoor ceiling fan, i think this is good blog, and i just bookmark it for using next time

reading all of your articles Thanks for sharing, your Article is really great, expecting more posts from you thanks again

how to set up apache virtual hosts on ubuntu 16.04

This article was very nice and helpful as well as interesting and add my insights, thank you very much admin and pardon me permission to share articles herein may be useful to you, in particular, are looking for
Escorts Dwarka

Thanks for sharing these useful information! This is really interesting information for me.
- www.hotmail.com
- google mail