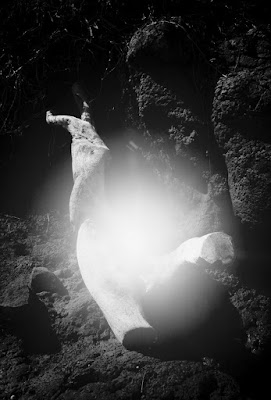 Nicholas Muellner will present a scripted slide-lecture in conjunction with the release of his new book from SPBH Editions, In Most Tides an Island.

Seductive, disorienting, informative and allegorical, this work is at once a glimpse of contemporary post-Soviet queer life, a meditation on solitude and desire in the digital age, and an inquiry into the nature of photography and poetry in a world characterized by cruelty, longing, resignation and hope.

As with all of Muellner’s image-text projects, this work initially evolved as a visually choreographed slide lecture, from which the related but distinct book emerged. At the Poetic Research Bureau, he will present the original lecture, integrating over 130 images, many not included in the published book.

In Most Tides an Island grew from two very different impulses: to witness the lives of closeted gay men in provincial Russia, and to compose the gothic tale of a solitary woman on a remote tropical island. Along the way, these disparate pursuits – one predicated on documentation, the other on invention - unexpectedly converged. Shot along Baltic, Caribbean and Black Sea coastlines, distant landscapes met at the rocky point of Alone. From that vista, they ask: what do intimacy and solitude mean in a radically alienated but hyper-connected world?

Nicholas Muellner is a photographer and writer based in West Danby, NY and Los Angeles. His image-text books include The Amnesia Pavilions (2011) and The Photograph Commands Indifference (2009). He is Co-Founder of ITI Press and the Image Text MFA at Ithaca College.

This is nice, I agree with you, thanks msbte time table and msbte