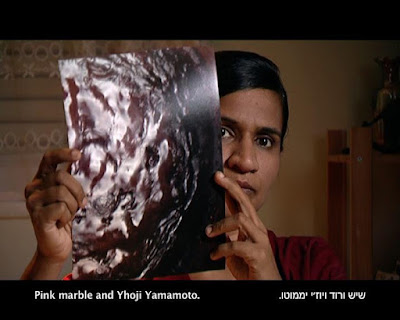 ROEE ROSEN (b. 1963) is a filmmaker and writer. His films include “Out” (2010), which won the Orizzonti awards for best medium length film at the Venice Film Festival. His latest book is entitled Live and Die as Eva Braun and Other Intimate Stories (Sternberg Press, 2017). His art is featured this year in Documenta 14. Rosen is a professor at Ha'Midrasha Art College, and at the Bezalel Art Academy, both in Israel.

Roee will screen an excerpt from his cinematic project The Confessions of Roee Rosen (2008), and speak to the piece, where the artist's supposed confessions are delivered in Hebrew by three surrogates: illegal female foreign workers who do not understand the language. Confessions premiered at the FIDMarseille festival, where it won a special mention, and was later shown worldwide, among other places at Manifesta 7, in Italy.

Catherine will read from MEDEA, but also read part of an essay she wrote about tragic performances. She intends to play with time.

MATVEI YANKELEVICH's books include the long poem Some Worlds for Dr. Vogt (Black Square), a poetry collection, Alpha Donut (United Artists), and a novella in fragments, Boris by the Sea (Octopus). His translations include Today I Wrote Nothing: The Selected Writings of Daniil Kharms (Overlook), and (with Eugene Ostashevsky) Alexander Vvedensky's An Invitation for Me to Think (NYRB Poets). He is a founding editor of Ugly Duckling Presse, and teaches at Columbia University's School of the Arts and the Milton Avery Graduate School of the Arts at Bard College.

Matvei will present "Fact's Folly," a 10 minute piece that draws on early soviet documentary film and theory, written in response to a photo-sequence ("Ship of Theseus," by photographer Hannah Whitaker) which will be shown as a video montage. In addition, he will read poems from a cycle-in-progress called "From a Winter Notebook."

This update, is nice, thanks for sharing, its really great 2 see you again msbte

This is great, thank you soo much click here nice

Nice article, I am glad to be able to read your article. do not forget to update and hold yes
Also read our article
Cara-Mengatasi-Asma-Pada-Anak-dengan-Menggunakan-Obat-Herbal
Bahaya-Radang-Tenggorokan-&-Obat-Radang-Tenggorokan-Herbal
Obat-Infeksi-Tulang-Karena-Bakteri-atau-Osteomielitis

The article is neat and interesting, and after I read pretty good .. I like the article you write .. and I also want to ask permission to paste health links.
Obat Herbal Untuk Flatulensi
Agen Resmi Jelly Gamat QnC kabupaten majalengka
We are waiting for the latest information