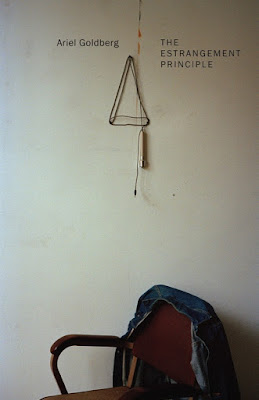 The Estrangement Principle is a book-length essay that explores landscapes surrounding the practice of categorizing "queer art."

In The Estrangement Principle Ariel Goldberg unravels the problematic label, “queer art” by consistently arguing for a wider range of associations with art made by queer identified people. Goldberg invokes the lives and works of writer Renee Gladman, and artists Jack Waters and Peter Cramer, among many others to bring the complexity of the communities and relationships behind art and literary histories into focus. This book-length essay mixes cultural criticism, close readings, and personal anecdotes, all the while developing a deftly wrought polemic. The Estrangement Principle is an exercise in contradiction with its ultimate goal being to resist the practice of movement naming.

Excerpt from The Estrangement Principle: "I began collecting the phrase ‘queer art’ in all its sweaty megaphone pronouncements. I felt pricked by ‘queer art,’ which I heard being uttered all around me in the titles of group shows, dance parties, anthologies, mission statements, press releases. I was also collecting palpable silences around events that could have used the word ‘queer,’ but didn’t. I had to get close to this description, like I get close to frames in museums, breathe on their glass and notice the dust. I wanted to get so close my vision would blur.”

Grace Dunham is a writer and activist from New York City. They have written about prison abolition and trans resistance for The New Yorker, The Village Voice, and anthologies published by The New Museum, MIT Press, and ONE Archives, among others. Their first chapbook of poetry is available at thefool.us. Their current project, Support.FM, is a crowdfunding platform to help trans and gender nonconforming people in jail and detention raise money for bail and bond. They live in Los Angeles.

Paul Mpagi Sepuya (1982, San Bernardino, CA) lives and works in Los Angeles, where he received an MFA in photography at UCLA. He resided in New York from 2000 – 2014, where he received a BFA from New York University’s Tisch School of the Arts and participated in Artist-in-Residence programs at the Lower Manhattan Cultural Council, the Center for Photography at Woodstock, The Studio Museum in Harlem and Fire Island Artist Residency. Sepuya’s work in the permanent collections of the Museum of Modern Art, the Whitney Museum of American Art, the Guggenheim Museum, the Studio Museum in Harlem, the International Center for Photography, the Cleveland Museum of Art, and the Carnegie Museum, among others. His work was recently featured in storefront: PUBLIC FICTION at The Museum of Contemporary Art Los Angeles and Callicoon Fine Arts and Sikkema Jenkins & Co., New York City. His solo exhibition at Yancey Richardson Gallery runs through April 1. He is a recipient of the 2017 Rema Hort Mann Foundation’s grant for emerging Los Angeles artists. www.paulsepuya.com

Ariel Goldberg's publications include The Estrangement Principle (Nightboat Books) and The Photographer (Roof Books). Goldberg is the Friday Night Coordinator at The Poetry Project. Their research and performance based work has been supported by the New York Public Library, Franklin Furnace Fund, Headlands Center for the Arts, The Invisible Dog, Residencias Artísticas Intercambios and SOMA in Mexico City. They teach at Parsons, The New School and Pratt Institute.
Posted by Joseph at 1:03 PM

This is amazing, thanks msbte really nice blog post thanks