The Poetic Research Bureau presents...ROBERTO ECHAVARRENGIANCARLO HUAPAYA& ROMÁN LUJÁNSaturday, April 29 2017Doors 7:30pmReading 8pmRoberto Echavarren (Montevideo, Uruguay) has several prize-winning books of poetry to his credit, most recently The Espresso between Sleep and Wakefulness and Centralasia. Rooted in both surrealism and contra-constructivist practices, it employs both dislocation and disjunctive series. A native of Uruguay and professor of world literature, long associated with New York University, he is the co-editor, along with José Kozer and Jacobo Sefamí of Medusario: muestra de poesía latinoamericana (Medusario: A Survey of Latin-American Poetry), the leading anthology of poetry in the Neo-Baroque style. Echavarren’s critical prose addresses the distinctive characteristics of innovative Latin-American poetry.

Giancarlo Huapaya (Lima, Peru) is author of the books Estado y Contemplación/ Canción de Canción se Gana, Polisexual and Taller Sub Verso, and the editor of the anthology Pulenta Pool: Peruvian Poets in the United States (Hostos Review, 2017). As curator, he will soon present BirúPirúPerú, an exhibition of the past fifteen years of Peruvian Visual Poetry at the University of Arizona Poetry Center. Previously, he was the advisor of the editorial and music industry policies of Cultural Industries in Lima, and he was the director of the Lima Poetry Festival during its first three years. He also is Founder and Editor of Cardboard House Press.

Román Luján, a Mexican poet and literary translator based in Los Angeles, is the author of Instrucciones para hacerse el valiente (2000), Aspa Viento (2003, artist book in collaboration with painter Jordi Boldó), Deshuesadero (2006) and Drâstel (2010 and 2015). Coeditor of two anthologies of Mexican poetry, his work has appeared in many anthologies of Latin American poetry. Translations of his poetry have appeared in Jacket2, Aufgabe, Mandorla, Crux Desperationis and Matter, among other journals. He is a Ph.D. candidate at the University of California, Los Angeles.
Posted by Joseph at 9:22 AM 9 comments:

Morgan Parker is the author of There Are More Beautiful Things Than Beyoncé and Other People’s Comfort Keeps Me Up At Night. Her poetry and essays have been published and anthologized in numerous publications, including The Paris Review, The BreakBeat Poets: New American Poetry in the Age of Hip-Hop, Best American Poetry 2016, The New York Times, and The Nation. Parker is the recipient of a 2017 National Endowment of the Arts Literature Fellowship, winner of a 2016 Pushcart Prize, and a Cave Canem graduate fellow. She is the creator and host of Reparations, Live! at the Ace Hotel in New York. With Tommy Pico, she co-curates the Poets With Attitude (PWA) reading series, and with Angel Nafis, she is The Other Black Girl Collective. Parker lives with her dog Braeburn in Brooklyn.

Harmony Holiday is the author of Negro League Baseball, Go Find Your Father/ A Famous Blues and most recently Hollywood Forever. She is also the founder of Mythscience, an arts collective devoted to cross-disciplinary work that helps artists re-engage with their bodies and the physical world in this so-called digital age, and the Afrosonics archive of jazz and everyday diaspora poetics. She studied rhetoric at UC Berkeley and taught for the Alvin Ailey American Dance Theatre. She received her MFA from Columbia University and has received the Motherwell Prize and a Ruth Lilly Fellowships. She is currently working on a book of poems and lyric essays on Reparations and the body, and a biography of jazz singer Abbey Lincoln. She lives in Los Angeles.
Posted by Joseph at 11:23 AM 14 comments:


Thom Andersen is an internationally renowned curator, filmmaker and scholar who has been creating experimental films for over 45 years. He attended Berkeley in the early 1960s and then returned to his hometown of Los Angeles to attend USC film school where he studied with Arthur Knight and eventually assisted on Knight's project THE HISTORY OF SEX IN CINEMA. While at USC Andersen met long-time friend and collaborator Morgan Fisher who assisted on Andersen's student film MELTING, a portrait of a sundae. He regularly attended local screening series including shows by the Trak Film Group and Movies 'Round Midnight and famously wrote about a controversial screening of Andy Warhol's SLEEP. After USC, Andersen attended UCLA and completed his experimental documentaries OLIVIA'S PLACE, EADWEARD MUYBRIDGE, ZOOPRAXOGRAPHER and --- -------. During the 1970s his films screened at venues including Los Angeles' Theatre Vanguard and San Francisco's Pacific Film Archive. In 1976 he moved to Buffalo, New York and after briefly teaching became a programmer at Media Study Buffalo. He then moved to Columbus, Ohio where he taught for twelve years. In 1987 he returned to Los Angeles and began teaching at CalArts. In 2003 he attracted significant attention for his essayistic, feature length documentary LOS ANGELES PLAYS ITSELF. The film won the National Film Board Award for Best Documentary at the 2003 Vancouver International Film Festival and was voted best documentary of 2004 by the Village Voice Critics' Poll. In 2010 he completed GET OUT OF THE CAR, a portrait of signs and abandoned spaces set to Los Angeles music.

David E. James has lived in Los Angeles since 1971. His recent books include THE MOST TYPICAL AVANT-GARDE: History and Geography of Minor Cinemas in Los Angeles, and the co-edited collections, OPTIC ANTICS: The Cinema of Ken Jacobs and ALTERNATIVE PROJECTIONS: Experimental Film In Los Angeles, 1945-1980.  His ROCK ‘N’ FILM: Cinema’s Dance With Popular Music was published by Oxford University Press earlier this year.

Susan Silton is a multidisciplinary artist based in Los Angeles. Her practice meshes photography, video, installation, performance, sound, and language. Her work often is often installed in public spaces, such as with her contribution to HOW MANY BILLBOARDS? and A SUBLIME MADNESS IN THE SOUL, a rooftop opera to commemorate the recently deconstructed Sixth Street Viaduct in Los Angeles. She also leads the all-female whistling group The Crowing Hens, a six woman whistle orchestra, which has recent performed at SITE Santa Fe and LAX Gallery, among other venues.

Jean-Luc Guionnet is a Parisian artist active in many fields (music, visual arts, cinema). He has mostly worked in electro-acoustics but also has a career in free improvisation, playing alto saxophone, soprano saxophone, church organ, and piano. He has collaborated with Éric La Casa, Éric Cordier, and André Almuro on tape music. His main free improv and jazz projects include Hubbub, Schams, Return of the New Thing, and the Joe Rosenberg Quintet.

Chelsea Rector is a Los Angeles based interdisciplinary poet, actress and dancer. She recently appeared in Asher Hartman and Gawdafful National Theater’s production of THE SILVER, THE BLACK, AND THE WICKED DANCE, at LACMA’s Bing Theater.
Posted by A Maxwell at 2:49 PM 17 comments: 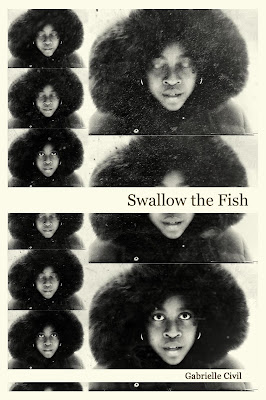 Join us as we celebrate the release of Gabrielle Civil's memoir Swallow the Fish.

Gabrielle Civil’s Swallow the Fish is a memoir in performance art that explores the medium from within its beating heart. Adding its voice to black feminist conversations, it combines essays, anecdotes, and meditations with original performance texts to confront audience, motivation, and fears. Both joy and panic appear in Civil’s world of performance, where neither walls nor city limits set the scope of the stage. Civil bares vulnerabilities and enthralls readers, asking essential questions and embodying dreams.

GABRIELLE CIVIL is a black feminist performance artist, originally from Detroit, MI. She has premiered over 40 original solo and collaborative performance works around the world. Recent works include “…hewn and forged….” at the Salt Lake City Performance Art Festival (2016); “_______ is the thing with feathers” at “Call & Response: Experiments in Joy” (2014); “Say My Name” (an action for 270 abducted Nigerian girls)” (2014); and “Fugue (Da, Montréal),” at the Hemispheric Institute Encuentro (2014). Her writing has appeared in Small Axe, Obsidian, Asterix, Rain Taxi, and other publications. The aim of her work is to open up space.

DOUGLAS KEARNEY has published six books, most recently, Buck Studies (Fence Books, 2016), of which Amaud Jamaul Johnson writes: “Seriously, a marvel. I recommend entering Buck Studies at midnight, only after listening to Public Enemy’s Fear of a Black Planet on repeat, skimming Pindar, Uncle Remus and the Bible, and eating at least two bowls of Count Chocula.” Kearney’s collection of writing on poetics and performativity, Mess and Mess and (Noemi Press, 2015), was a Small Press Distribution Handpicked Selection that Publisher’s Weekly called “an extraordinary book.” Raised in Altadena, CA, he lives with his family in the Santa Clarita Valley and teaches at CalArts.

ANNA JOY SPRINGER is a queer femme visual artist, performer, and cross-genre writer working with the sacred, perverse, hilarious and threatening. She is the author of The Vicious Red Relic, Love (Jaded Ibis, 2011), an illustrated fabulist memoir with soundscape, and The Birdwisher, A Murder Mystery for Very Old Young Adults (Birds of Lace, 2009). Her other work appears in far-flung print and online publications (ex: The Writer’s Chronicle; Encyclopedia; Nerve Lantern: Axon of Performance Literature; Glitter & Grit: Queer Performance from the Heels on Wheels Femme Galaxy; Pank, and The Volta), as well as on several records (Lookout!; Alternative Tentacles). An Associate Professor of Literature at UC San Diego, she teaches experimental writing, feminist literature & graphic texts. She’s played in punk and dyke punk bands Blatz, The Gr’ups, and Cypher in the Snow, touring the U.S. and Europe in these bands and with Sister Spit, a raucous feminist literary performance group. She is the winner of an Academic Senate Distinguished Teaching Award (2010) and a recipient of UCSD Chancellor's Associates Faculty Excellence Award (2013).
Posted by Joseph at 11:16 AM 9 comments: