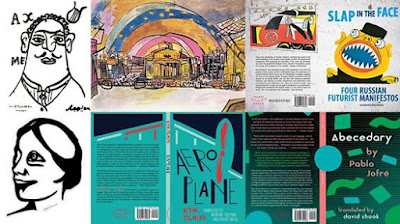 Abecedary by Pablo Jofré
Translated from Spanish by David Shook with a prologue by Will Alexander
Paperback, Bilingual edition, 84 pages, $14.00

“Jofré’s vision empowers his alchemical expression, swirling as it does his personal monsoon of droplets that casts spells seemingly closer in technique to the creative dossiers of Enrique Lihn and Nicanor Parra. Abecedary condenses via poetic semaphore lingual neutron stars penultimate to incalculable eruption.” —Will Alexander, from the Prologue: Quantum Lingual Deftness

Pablo Jofré’s alphabet begins with Abyss and travels through Caravan, Jewel, and Narcolepsy before arriving at Xenophobia, charting the Berlin-based Chilean poet's obsessive exploration of the world around him through the lens of politics, relationships, and travel. Awarded the Gabriela Mistral Chilean National Literature Contest for his book Abecedario originally in Spanish, this English-language edition, Abecedary, is supported by the Chilean government's prestigious National Council of Arts and Culture Translation Support Grant.

“Kyn. Taniya exposed the relationship between modernity and the avant-garde. His speed and calm, his temporality and permanence, his economy and spatiality, his visualness and sound, his humor and science bear witness to the changes and contradictions of his era. That’s where his importance resides: poetic exaltation as description of mood, prediction, and perfume traversing minds like the globe as it spins. Luckily, Kyn. Taniya’s work found David Shook and Anthony Seidman, two poet-translators who understand the social, political, emotional, and sarcastic currents of the work of this aviator and Mexican poet. The translators revel—like hummingbirds in nectar—in the reconstruction of Kyn. Taniya’s language, with all its glint and rhythm, its ideology and melancholy.” —Giancarlo Huapaya

“These four manifestos of Russian Futurism, charting key points in the rapid unfolding of the Russian avant-garde, provoke the appreciative bourgeoisie while declaring the liberation of the word, the phoneme, and even the grapheme! Dralyuk’s brisk, inventive translations convey the energy and rowdiness of the original.” —Eugene Ostashevsky
Posted by Joseph at 11:21 AM No comments: 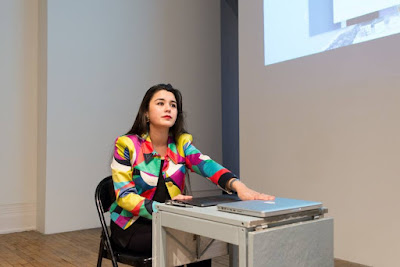 ​Rodrigo Toscano is an experimental poet, playwright, and labor activist whose work addresses borders. Sophia Le Fraga is a poet and artist who has presented works in MoMA PS1’s Greater New York exhibition and Performa 15. Ed Steck’s poetry is often drawn from his experiences with insomnia and its associated memory loss.

This reading is part of a series presented in conjunction with the exhibition storefront: THIS KNOWN WORLD: Spontaneous Particulars of the Poetic Research Bureau.

The program is generously supported by William and Ruth True – Gramma Poetry.

Posted by Joseph at 8:17 AM No comments: 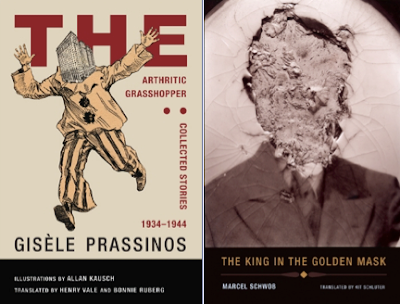 The PRB presents two Wakefield Press authors with brand new collections of translations from the Press.

Bonnie Ruberg reads from her translation of Gisèle Prassinos, THE ARTHRITIC GRASSHOPPER: COLLECTED STORIES, 1934–1944. Kit Schluter will read from Wakefield's new collection of Marcel Schwob tales, The King in the Golden Mask.

Bonnie Ruberg is an postdoctoral scholar at the University of Southern California and an assistant professor at UC Irvine, where her research focuses on gender and sexuality in digital media. Bonnie received her Ph.D. from UC Berkeley in Comparative Literature with a focus in a range of areas, including French surrealism. She has also worked as a journalist for publications like The Village Voice and The Economist.

Kit Schluter is the translator of Marcel Schwob’s The Book of Monelle and The King in the Golden Mask (both available from Wakefield Press), as well as Jaime Saenz’s The Cold (Poor Claudia) and, in collaboration with Jocelyn Spaar, Amandine André’s Circle of Dogs (Solar▲Luxuriance). His writing has appeared in BOMB, Boston Review, Hyperallergic, Folder, inter|rupture, Entropy and elsewhere. The recipient of a 2016 National Endowment for the Arts fellowship for further translation of Schwob, he coedits/designs for O’clock Press and currently lives in Mexico City.

Gisèle Prassinos (1920–2015) was born in Istanbul of a Greek father and an Italian mother. At the age of thirteen she began to compose short absurdist vignettes in a fit of boredom, filling up pages with tales of sarcastic stains, arrogant hair, liquid frogs, and blue spiders. Encouraged by her brother, who introduced her and her experiments in automatic writing to his Surrealist colleagues, she immediately found herself welcomed into the Parisian avant-garde community and her stories were published in all the significant literary journals of the time. Her first collection was published in 1935, with a preface by Paul Éluard and a frontispiece portrait by Man Ray. With World War II, Prassinos stopped publishing and began to distance herself from the Surrealists and the limitations imposed by her writing being so closely bound to the idea of automatism in its purest, “childhood” form. Writing nothing from 1944 to 1954, she then returned to literature with a series of novels and stories that, if still imbued with a Surrealist sensibility, pointed to a new direction in her writing.

Marcel Schwob (1867–1905) was a scholar of startling breadth and an incomparable storyteller. A secret influence on generations of writers, from Guillaume Apollinaire and Jorge Luis Borges to Roberto Bolaño, Schwob was as versed in the street slang of medieval thieves as he was in the poetry of Walt Whitman. His allegiances were to Rabelais and François Villon, Robert Louis Stevenson and Edgar Allan Poe. Paul Valéry and Alfred Jarry both dedicated their first books to him, and in doing so paid tribute to the author who could evoke both the intellect of Leonardo da Vinci and the anarchy of Ubu Roi. He was also the uncle of Lucy Schwob, better remembered today as the Surrealist photographer Claude Cahun.
Posted by Joseph at 12:04 PM No comments:

Saturday, June 10: Writers Who Love Too Much a book launch for the New Narrative Anthology
from Nightboat Books

In the twenty years that followed America’s bicentennial, narrative writing was re-formed, reflecting new political and sexual realities. With the publication of this anthology, the New Narrative era bounds back to life, ripe with dramatic propulsion and infused with the twin strains of poetry and continental theory. The reader will discover classic New Narrative texts, from Robert Glück to Kathy Acker, as well as rare supplemental materials, including period interviews, essays, and talks, which form a new map of late 20th century creative rebellion.
Posted by Joseph at 1:01 PM 2 comments: