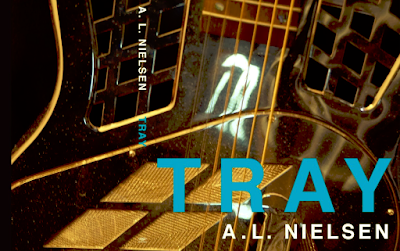 This Saturday night, Will Alexander reads at the Poetic Research Bureau with Aldon Lynn Nielsen, who will be launching his new book from Make Now Press, TRAY.

With Tray Aldon Nielsen establishes himself as a formidable voice among American poets. And voice, his forte and bete noire, articulates social criticism as aesthetic form. The incantations of religious and secular crusades are rendered in the eponymous opening poem as live scratching by a deejay (call him History, or God): Gangster Zimmerman as another wanna-be gangsta. And in the poems that constitute “Escamotage,” the second half of the book, Nielsen’s penchant for puns, jokes and blues whimsy are offset by a deft lyricism that is, by turns, poignant (“Interval” is a touching homage to Lucille Clifton’s “The Lost Baby Poem”), humorous (“Clarence Farmer’s Complaint”) and celebratory (“Experimental Hope”). The common senses and uncommon sense delineated as Tray will be balm for our new dark age.
–Tyrone Williams

These days we’re trying to save us. These are some good poems about that.
–Rod Smith

Will Alexander—poet, novelist, essayist, playwright, aphorist,visual artist, and pianist. He is author of over thirty books in the above mentioned genres. His latest book is one of aphorisms entitled Across The Vapour Gulf.

A.L. Nielsen was the first winner of the Larry Neal Award for poetry, and has appeared in both Best American Poetry (selected by John Ashbery) and Best American Experimental Writing (selected by Tracie Morris and Charles Bernstein). His previous books of poetry include Heat Strings, Evacuation Routes, Stepping Razor, VEXT, Mixage, Mantic Semantic and A Brand New Beggar. He currently serves as the Kelly Professor of American Literature at Penn State University, and previously taught at Howard University, San Jose State, UCLA, Central China Normal University and Loyola Marymount. His books of criticism include Reading Race, Writing between the Lines, C.L.R. James: A Critical Introduction, Black Chant and Integral Music. With Lauri Ramey he has edited two anthologies of innovative writings by African American poets. Other awards include The SAMLA Studies Prize, the Kayden Prize, the Darwin Turner Award, an American Book Award and the Josephine Miles Award. When not teaching at Penn State, he lives in Santa Barbara.
Posted by Joseph at 1:08 PM