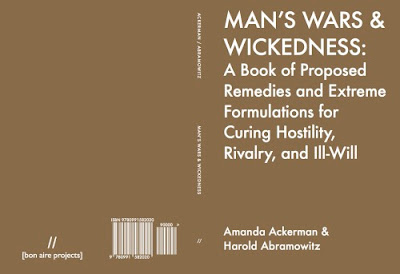 Mans Wars and Wickedness: A Book of Proposed Remedies and Extreme Formulations for Curing Hostility, Rivalry, and Ill-will

The book is based on the idea of words being medicine - taking us into spaces of dissolution and re-emergence. Amanda and Harold have had an ongoing collaboration also thinking about how we literally ingest/digest language to create unexpected personal transformations, spark our intuitive genius, and embody surprising antidotes to tyranny.

Launching the book with us will be:

The Nine Herbs Charm Collective (Saewon Oh, Eric Kim Hannah Mjolsnes) – conducting a plant ceremony for an herbal antidote. Nine Herbs Charm consists of Hannah Mjølsnes, Eric Kim, Saewon Oh and the nine plants described in an Old English poem first recorded in the 11th century. They perform ceremonies and create environments for encounters with these plants, whose history is closely interconnected with our own.

Eric Heep leading The Reader's Chorus – performing a newly written score based on text from the book! The Reader’s Chorus is made up of LA composers, musicians, visual artists, filmmakers, writers and poets. Inspired by the possibilities of a group of speaking voices we write for, experiment with, and perform the sound of reading.

Joseph Mosconi is a writer and taxonomist based in Los Angeles. He co-directs the Poetic Research Bureau and co-edits the art & lit mag Area Sneaks. He is the author of Fright Catalog, Demon Miso/Fashion In Child, and other books. Writing has appeared in Triple Canopy, The Third Rail, Fillip, Material Press, Best Experimental American Writing and other journals.

Sam Cohen's fiction can be found or is forthcoming in Fence, Gulf Coast, Black Clock, Two Serious Ladies, Pank, and other journals, and as a chapbook on Birds of Lace. She is working on a PhD in Creative Writing and Literature at the University of Southern California and is the founder of the online journal Yes Femmes.

Amanda Ackerman’s publications include the Book of Feral Flora, Unfo Burns a Million Dollars, and the scented pamphlet Air Kissing. Her work focuses largely on the feralscape, divining techniques that allow for communication across species boundaries. With Dan Richert, she is working on a series of projects using biofeedback and multi-sensory techniques that allow plants to create poems. Their olfactory installation Unknown Giants is currently part of The Laboratory for Aesthetics and Ecology’s A New We in Norway’s Kuntshall Trondheim gallery. With Harold Abramowitz, she co-edits the press eohippus labs.

Harold Abramowitz's books include Blind Spot, Not Blessed, Dear Dearly Departed, and UNFO Burns A Million Dollars. Harold co-edits the short-form literary press eohippus labs, and writes and edits as part of the collaborative projects, SAM OR SAMANTHA YAMS and UNFO. He teaches in the Department of General Studies at Charles R. Drew University in Los Angeles.

Collaboratively constructed and conceived, Man’s Wars and Wickedness: A Book of Proposed Remedies and Extreme Formulations for Curing Hostility, Rivalry, and Ill-Will is a book that sets out to accomplish exactly what it says it does…

Taking as its point of departure allegories and alchemical texts, Man’s Wars and Wickedness dissolves and transmutes a multiplicity of narrative forms into a book of its own kind, a sui generis work of literature. A timely book, Man’s Wars and Wickedness takes on the dangerous fictions that become our collective realities. In the country of Swabia, a place with, among other elements, a paper mill, a new bible, an acting mayor, a doctor, a blue ox, a great war, someone finds millions and millions of pages of manifestos fluttering in the air, and on the street…

— Elizabeth Hall, author of I Have Devoted My Life to The Clitoris

http://www.bonaireprojects.com/mans_wars
Posted by Joseph at 8:08 AM