Join the Poetic Research Bureau this Saturday night as we celebrate Justin Clifford Rhody's new book A Horse With A Name from Rebel Hands Press. Joining Justin will be Sarah Heston, from Los Angeles, and Andrew Kenower, from Berkeley. 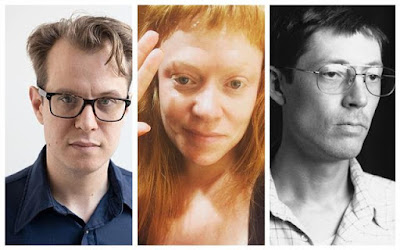 Andrew Kenower runs the audio archive A Voice Box, has designed books for Trafficker Press, Despite Editions, and Travelin Lite, and with Paul Ebenkamp curates the reading series Woolsey Heights in Berkeley, CA where he also calls home. Check out his SoundCloud.

Sarah Heston’s manuscript-in-progress, Daughter of Endtimes, is a true-crime, survivalist memoir that details a daughter-father relationship built on apocalyptic end-of-days scenarios in Los Angeles. Her nonfiction can be found in Tin House, The Iowa Review and elsewhere, while her criticism on redefining the history and aesthetic of western memoir away from concepts of the self can be found or is forthcoming in ASAP/Journal, the LA Review of Books, and Assay.

Justin Clifford Rhody is a photographer and poet currently based in Oakland, CA. His work has been seen widely online, through exhibits, traveling slideshows, and in publications, including two different monographs of his work created in Central America between 2009 and 2012: Zona Urbana and Dec. 21st, 2012: Chichicastenango (Mirro Editions). Recent works include Married To America (Hidden Eye Press), Slow Boat To China and Alone Together (with collagist Abigail Smith), as well as a collection of found-language poetry titled A Horse With A Name (Rebel Hands Press). Rhody also organizes a public slideshow series of found 35mm photo slides called Vernacular Visions and is co-founder of the White Leaves Artist Residency in El Rito, New Mexico.
( https://www.justincliffordrhody.com/)