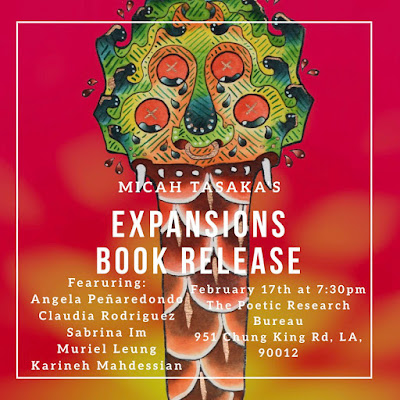 A book release party for

**NOTE: The annual Chinese New Year's Celebration will be happening in Chinatown this Saturday. Parking may be difficult! Please consider parking outside of Chinatown and walking down, or taking the Gold Line, which has a Chinatown stop.

Micah Tasaka is a queer mixed Japanese poet from the Inland Empire exploring the intersections of identity, spirituality, gender, and sexuality. They received their undergraduate degree in creative writing from the University of California, Riverside. Since then, Micah has been sharing their poetry on stage and traversing the spoken word and open mic scenes. Their debut chapbook, Whales in the Watertank, was self-published in 2014, and they just released their first full-length manuscript, Expansions, on Jamii Publications. Micah is also a healer, community organizer, and writing teacher. www.micahtasaka.com

Muriel Leung is the author of Bone Confetti, winner of the 2015 Noemi Press Book Award. A Pushcart Prize nominated writer, her writing can be found or is forthcoming in Gulf Coast, Drunken Boat, The Collagist, Fairy Tale Review, and others. She is a recipient of fellowships to Kundiman, VONA/Voices Workshop and the Community of Writers at Squaw Valley. She is a contributing editor to the Bettering American Poetry anthology and is also Poetry Co-Editor of Apogee Journal. Currently, she is pursuing her PhD in Creative Writing and Literature at University of Southern California. She is from Queens, NY.

Claudia Rodriguez is a community scholar, educator, creative writer and performer from Compton. She published her first collection of poetry Everybody’s Bread in 2015 with Korima Press. For the past twenty years, she has developed work for/about and with marginalized communities. She is currently a Ph.D. student in Chicana/o Studies at UCLA. http://rodriguezwriter.blogspot.com/

Sabrina Im is a daughter of Khmer refugees, and a poet who often writes of the "in-betweens" she finds herself in. She received her BA in World Literature and Cultural Studies from the University of California, Santa Cruz, and currently resides in Los Angeles. Sabrina hopes to continue using the written and performing arts as a means for mediating inter-generational narratives, and mobilizing others to explore their art too. Her work is forthcoming in Issue Seven of TAYO Literary Magazine.
Posted by Joseph at 12:31 PM