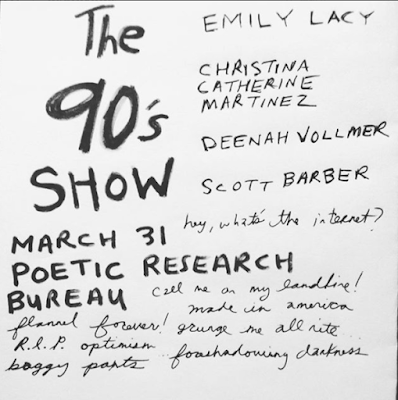 Take a trip down pre-internet dominant memory lane, as four artists explore the unique and sometimes humorous poetics of the 90's through music, writing, video, and performance.

Emily Lacy is a folk and electronic sound artist generating works in music, film, and other media. Her performances and recordings have been included in various exhibitions at PS1 MOMA, MCA Chicago, the Whitney Museum of American Art, the Hammer Museum, the Walker Art Center, and LACMA, in addition to various DIY spaces all throughout America.
http://www.emilylacy.net/

Christina Catherine Martinez is a writer and stand up comedian from Los Angeles CA. Her art writing and cultural criticism have appeared in ArtForum, VICE, ArtSlant, NYMag, Elephant, FOUNDATIONS, and The Art Book Review, as well as various anthologies and artist monographs. She produces and hosts Aesthetical Relations, an irregular and itinerant live talk show with comedians and artists and video screenings and a rotating house band. Her first book of essays is being published by Hesse Press in September 2018
http://christinacatherine.info/

Deenah Vollmer is a writer living mostly in Los Angeles and sometimes in New York City. She's a former New Yorker listings writer, Fulbright scholar in Berlin, and member of the Pizza Underground, a Velvet Underground cover band, but with lyrics about pizza. Her writing has appeared in Interview Magazine, VICE, The Believer, N+1, Guernica, We the Tender Hearted, december, and more.
https://www.wethetenderhearted.com/#/deenah-vollmer/

Scott Barber is a Los Angeles based music producer, engineer and musician. He has played and toured with many bands including The Submarines. Scott has also been a composer and songwriter for several projects, Tiger Style Games and his own solo artist work. As well as the creator of the youtube channel Deep Cuts that offers free online music tutorials. Currently he is running The Barber Shop Recording Studio and has worked with over fifty bands and projects since the studio was founded in 2013.
https://scottxbarber.bandcamp.com/
Posted by Joseph at 1:36 PM