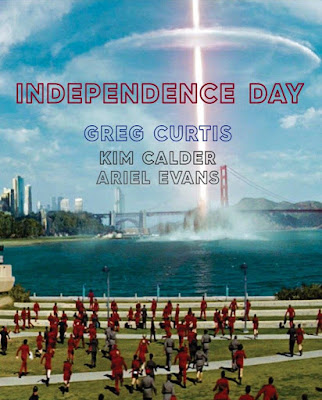 Celebrating the publication of Independence Day (Insert Blanc Press) with a performance/reading!

Independence Day (Insert Blanc Press) presents Greg Curtis's still photographs of extras from late 90s and early 2000s disaster films witnessing their own deaths alongside a long poem drawn from the corresponding screenplays by Kim Calder and an essay on photography by Ariel Evans.

Kim Calder studies post-1945 American literature and theory at the University of California, Los Angeles and is co-director of Les Figues Press. Her work has appeared in The Believer, Jacket2, The Los Angeles Review of Books, ASAP/Journal, and The Volta. She is currently working on two manuscripts: The Nervous System, an autotheoretical work, and her dissertation, which examines the centrality of indigeneity and indigenous cosmologies across contemporary American literatures of resistance.

Greg Curtis' works in photography, video, and installation have been exhibited at Monte Vista Projects, Open House, Institute of Jamais Vu, Weekend, Cirrus Gallery, and Land of Tomorrow, among others. He has also organized exhibitions at Ms Barbers and Elephant. He received an MFA from California Institute of the Arts, and lives and works in Los Angeles.

Evan Kleekamp codirects Les Figues Press in Los Angeles. They are the author of two chapbooks, 13 THESES ON STATE-SPONSORED BLACK DEATH IN AMERICA (Kastle Editions, 2016) and Once Upon A Time I Was Michael Thomas Taren (Ghost City Press, 2017). Excerpts from their in-progress manuscript Three Movements are forthcoming in Fence and Nightboat Books’ Responses, New writings, Flesh anthology edited by Ronaldo V. Wilson, Bhanu Kapil, and Mg Roberts.
Posted by Joseph at 1:43 PM