Saturday, May 19: Hillary Gravendyk's The Soluble Hour with Cynthia Arrieu-King 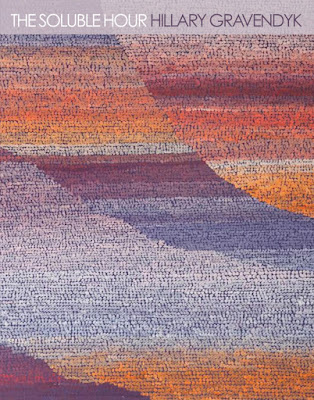 In Hillary Gravendyk’s The Soluble Hour, the speaker sings with visionary passion how the beloved and dear ones will soon be without her and laments for their imminent grief. But being in extremis pulls the voice towards testimony of unquestioned love, a recollection of landscapes Californian and otherwise, and previous selves. The poet wields her deep solitude as the measure of truth and conviction, the self that accepts its own impermanence.

Hillary Anne Gravendyk was born in Manhattan Beach, California on March 1, 1979, and grew up in Snoqualmie Valley, Washington State, in the town of Carnation. She attended Tulane and the University of Washington and went on to get a doctorate in English Literature from the University of California, Berkeley. In 2008, her chapbook The Naturalist came out from Achiote Press and in 2010, her book Harm, published by Omnidawn, was a finalist for the California Writer’s Exchange Award. In 2009, she was hired to teach 20th Century poetry at Pomona College in Claremont, California. After moving to Oakland in 2003 with her husband Benjamin Burrill, Hillary lived out most of her adult life in the San Francisco Bay Area and Claremont.

Cynthia Arrieu-King is an associate professor of creative writing at Stockton College and a former Kundiman fellow. Her books include People are Tiny in Paintings of China, Manifest and forthcoming in 2019 Continuity. She met Hillary in 2008 at the Vermont Studio Center where they became good friends. They wrote collaboratively the book Unlikely Conditions from 1913 Press, 2016.
Posted by Joseph at 2:23 PM