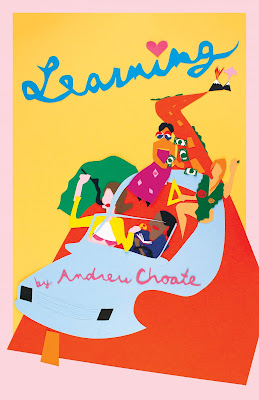 Learning was recently published by The Accomplices (Writ Large Press, Civil Coping Mechanisms & Entropy) and this is a book release party for it!

Andrew Choate will read from his book.

Haoyan of America has made a film for this event.

And Patrick Shiroishi will perform a saxophone solo titled "benkyou" written by Radu Malfatti, a piece which was also written for this event. This will be the world premiere performance of this piece for solo saxophone.

ANDREW CHOATE is a writer who was born and raised in South Carolina. He is the author of Langquage Makes Plastic of the Body (Palm Press), Stingray Clapping (Insert Blanc Press), and Too Many Times I See Every Thing Just the Way It Is (Poetic Research Bureau.) I Love You More, a collection of his texts for performance, is forthcoming from Insert Blanc. His writings on music and art have been published in The Wire, Signal to Noise, The Attic, Coda, Art Ltd., d’Art International, and Facsimile.

As @saintbollard he photographs and organizes performances around bollards. He won the award for Best Visual/ Performance Art, as well as the Warwick Broadhead Memorial Award at the 2016 Dunedin Fringe Festival in New Zealand. His visual work has been exhibited at the Yerevan Center for Contemporary Art, the Torrance Art Museum, Barnsdall Art Park, The University of Western Australia, Mullany High, the Giradeau Chapel, High Energy Constructs, Overca$h Gallery and, most recently, General Projects, where he had his first solo show, Demon Purse, in 2018. Corroballorations, a duo show with Joe Williamson at PS Kaufman in 2018, elicited sparks of approval. Exegesis Eisegesis Encaustic, his series of collaborative paintings with Katie Herzog, were on display at Klowden Mann in 2016, and they are currently working on another series for a show in October 2018.

His radio plays and sound works have been broadcast on WDR in Germany, Radiate Mobile in Italy, File Hypersonica: Electronic Language International Festival in Brazil, Resonance FM in England, and various outlets in the US. As “The Unwrinkled Ear,” he hosts a radio show on KCHUNG every other week and curates a concert series devoted to the international world of improvised music.
Posted by Joseph at 1:16 PM