Another year of poetry, film and performance has nearly come and gone at your local “literary service in the public domain.” We’d love your help to keep us going into the new year. We hope that you will support the PRB by making a year-end tax-deductible donation.

In 2018 the Poetic Research Bureau held over 50 readings and performances from its storefront in Chinatown, Los Angeles. We’ve also continued our programming with new and ongoing series and events which we hope to continue into the new year, including:

We have several exciting things planned for 2019. Your contribution gives us the opportunity to continue to provide a space for free and open readings and performances, new publications, complimentary beverages, and support for traveling writers. As always, 100% of your donation goes to keeping the lights on, the rent paid, and the calendar full. Any size contribution is welcome!

Joseph & Andrew
From the PRB 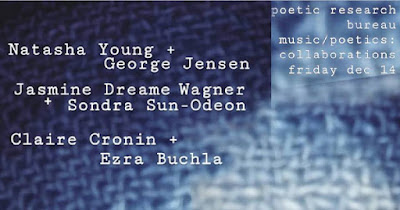 Join us for a night of collaborations musical and poetic.

Claire Cronin is an interdisciplinary artist from Los Angeles who currently lives in Athens, GA. She is the author of the poetry chapbook A Spirit is a Mood Without a Body, winner of the 2018 Dead Lake Chapbook contest. Her writing can be found in Bennington Review, Sixth Finch, Vinyl Poetry, BOAAT, Cloud Rodeo, Yalobusha Review, and other places. As a musician, Cronin has released two records on an independent label and toured nationally. As an artist, she has performed in solo and collaborative pieces at The Hammer Museum, Redcat, Los Angeles Contemporary Exhibitions, and Machine Project and held residencies at Elsewhere Artist Collaborative and Monte Vista Projects. She is currently finishing a PhD in English at the University of Georgia where she works on post-war American poetry, occultism, and the horror genre.

Jasmine Dreame Wagner (NYC) is an American writer, artist, and musician. She is the author of On a Clear Day (Ahsahta Press), a collection of lyric essays and poems deemed “a capacious book of traveller’s observations, cultural criticism, and quarter-life-crisis notes” by Stephanie Burt at The New Yorker and “a radical cultural anthropology of the wild time we’re living in” by Iris Cushing at Hyperallergic. She is also the author of Rings, winner of the Kelsey Street Press Firsts! Prize, selected by Elizabeth Robinson, and six chapbooks. Wagner's poems and lyric essays appear in American Letters and Commentary, Beloit Poetry Journal, BOMB Magazine, Colorado Review, Fence, Guernica, Hyperallergic, and Witness Magazine.

Sondra Sun-Odeon is a songwriter/recording artist whose solo work is drenched in the ethereal, soft doom, and otherworldliness. A new album, has been taking shape in the studio with Alex De Groot (Zola Jesus) engineering/producing; it includes collaborators Thor Harris (SWANS) and John Bohannon (Ancient Ocean) and also features: vocals by Lia Simone Braswell (A Place to Bury Strangers), Mary Lattimore on harp. Desire, will be released in 2019.

Natasha Young is a writer based in LA, originally from Portland, Maine. She is the author of the novel Static Flux, published in 2018 by Metatron Press. Her stories, essays, and other musings can be found in such publications as Artforum, C Magazine of Contemporary Art, Electric Literature, Real Life Magazine, Somesuch Stories, Cosmonauts Avenue, Garage Magazine, and Adult Magazine.

George Jensen is an experimental sound artist whose quadraphonic surround-sound installations immerse the individual in a mind-altering experience.
Posted by Joseph at 8:56 PM No comments:

Pablo Lopez is the author of NUMBERS (2015, CBB) and Structures the Moment (forthcoming, Anonymous Energy). He lives in L.A.

Steve Dickison’s Inside Song is just out (Omnidawn, 2018, selected by Tyrone Williams). He directs The Poetry Center at San Francisco State and teaches there and at California College of the Arts.
Posted by Joseph at 9:03 AM No comments: