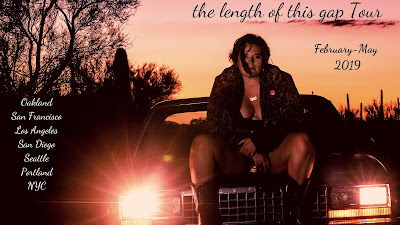 Kristen E. Nelson is taking her new collection of poetry, the length of this gap, on the road.

Praise for "the length":

One of the most powerful, breathtaking bodies of poetry fortifying the will to survive. I am an enormous fan of Kristen Nelson’s poems and am always excitedly anticipating the next poem showing me the better parts of our species and how to love and thrive! —CA Conrad

In the length of this gap, Kristen E. Nelson does the trembling work we so often try to avoid. Here she makes eye contact with the abyss – seeking to understand how we metamorphose in the moment of (and days, weeks, years following) inexplicable loss. This is a book of great courage, striving to put the world back together with long lists of what now is and can become. How thankful I am to have her and her work as my guide – she who dares to “wish to go back and walk through the wasps,” and returns full of “love and love with some commas.”—tc tolbert

Death is not always tragedy, but then again, neither is love – its encounter, its ennui, its wound. Kristen Nelson’s the length of this gap revels in passionate ambivalence, gliding between emotions without netted hearts to catch her fall. Oh foolish bravery! Sorrow becomes lust and lust becomes abandonment, and Nelson makes me want to be bolder, hotter, sexier – and I crave. These poems persuade my addiction. —Lily Hoang


Kristen E. Nelson is a queer writer, performer, activist, and community builder. She is the author of the length of this gap (Damaged Goods, August 2018) and two chapbooks: sometimes I gets lost and is grateful for noises in the dark (Dancing Girl, 2017) and Write, Dad (Unthinkable Creatures, 2012). Kristen is the founder of Casa Libre en la Solana, a non-profit writing center in Tucson, Arizona, where she worked as the Executive Director for 14 years. www.kristenenelson.com

Sam Cohen’s writing is in Delirious Hem, Sidebrow, Pank, Black Clock, Joyland, Gaga Stigmata, RECAPS, and elsewhere. Her chapbook Gossip was published by Birds of Lace Press in 2013. She has an MFA from CalArts and lives in Los Angeles.

Born during a blizzard in New York with the gifts of premonition, and manifestation, Bernadette McComish is a fortuneteller and a medium. Her father was an extraterrestrial from the future that traveled back in time, and impregnated her mother in an astral field of honeysuckle. When she writes, her words become reality, and she’s been known to turn lovers into goldfish with a sonnet, and speak directly with shades of drag queens. To her, all people are just a john, regardless if they are a woman, a ghost, or the president…especially if they're the president. She earned an M.F.A. in Poetry from Sarah Lawrence, and an M.A. in Teaching English as a Second Language from Hunter College. Her poetry has appeared in The Cortland Review, Sunday Salon, Hospital Drive, Slipstream, Storyscape, Rag Queen Periodical, Flapper House, DeLuge, and New Millennium Writers. She performs and tours with the Poetry Brothel and Poetry Society of New York curing one human at a time with words and glitter. She also teaches High School in Los Angeles.

Wendy C. Ortiz is a Los Angeles native. She is the author of Excavation: A Memoir (Future Tense Books, 2014), Hollywood Notebook (Writ Large Press, 2015), and the dreamoir Bruja (CCM). In 2016 Bustle named her one of “9 Women Writers Who Are Breaking New Nonfiction Territory.” Her work has been featured in the Los Angeles Times, The Rumpus, the Los Angeles Review of Books, and the National Book Critics Circle Small Press Spotlight blog. Her writing has appeared in such venues as The New York Times, Joyland, StoryQuarterly, and a year-long series appeared at McSweeney’s Internet Tendency. Most recently her “Urban Liminal” series of texts appear alongside signature graphic representations of the projects of Lorcan O’Herlihy Architects in the book Amplified Urbanism (2017). Wendy is a psychotherapist in private practice in Los Angeles.