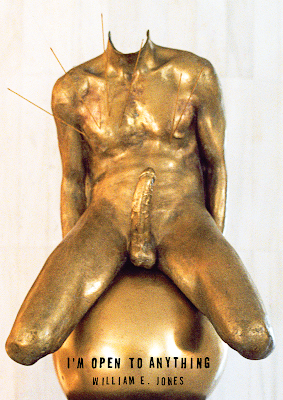 William E. Jones is an artist, filmmaker, and writer who lives in Los Angeles. He has made two feature length experimental films, Massillon (1991) and Finished (1997), the documentary Is It Really So Strange? (2004), videos including The Fall of Communism as Seen in Gay Pornography (1998) and Fall into Ruin (2017). His work has been the subject of retrospectives at Tate Modern (2005), Anthology Film Archives (2010), Austrian Film Museum, and Oberhausen Short Film Festival (both 2011). He was included in the 1993 and 2008 Whitney Biennials and the 53rd Venice Biennale (2009). His books include Is It Really So Strange? (2006), Tearoom (2008), Killed: Rejected Images of the Farm Security Administration (2010), Halsted Plays Himself (2011), Imitation of Christ (2013), Between Artists: Thom Andersen and William E. Jones (2013), and True Homosexual Experiences: Boyd McDonald and Straight to Hell (2016). I’m Open to Anything is his first novel.

M Kitchell is an artist and movement practitioner who lives in Oakland, CA. Dedicated to obsessive research and the literal act of finding, Kitchell is primarily concerned with the impossible (or, perhaps, the outside) and levitation (or, perhaps, the float). An expanded list of his interests include landscape as limit-experience, hunting the void, ecstatic & trance states, inversion practice, and Georges Bataille's list of "apparently sovereign behaviors." In addition to his more conceptual interests, his regular physical practice involves investigations into the asana of post-ashtanga yoga, soft acrobatics & the flow-state. He continually explores modes of backbending as an invocation of a bridge between the world of the living and the dead, and handstanding due to its inherent subversion of a humanist verticality. He also teaches public handstand classes in Emeryville, CA. His latest book, Experimental Men, has just been released from Inside the Castle.

Jarett Kobek is the author of I Hate the Internet, Only Americans Burn in Hell and other books. In 2017, he was shortlisted for the Literary Review's Bad Sex in Fiction Award. He is also the co-founder and editor of We Heard You Like Books.
Posted by Joseph at 10:10 AM