Saturday, August 17 screening: If You Won't Read, Then Why Should I Write? by Jarett Kobek (The Movie!) 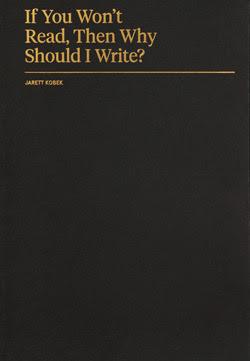 On Saturday, August 17th, 951 Chung King Road once again opens its doors and lends its venue to a screening series dedicated to the odd and obscure programmed by filmmaker, Nick Toti. This latest installment will be the first (and quite possibly only) screening of Toti's own newest work, If You Won't Read, Then Why Should I Write? by Jarett Kobek (The Movie!).
In 2012, Jarett Kobek published a book comprised primarily of transcriptions from the most banal moments of various celebrity sex tapes (with occasional detours into the public deaths of brutal dictators and other marvels of modern living). In an interview at the time, he described his thought process thus: "In a brattish fit of pique, I decided that people were idiots without interest in anything except the filth of celebrity culture. So why not just give people what they want?"
In 2017, Nick Toti read Kobek's book while recovering from a minor mental and physical breakdown following a tremendously stressful film shoot. Thereafter Toti spent the next 18 months sporadically (and often half-heartedly) working to to adapt this book for the screen.
Nick Toti and Jarett Kobek will both be in attendance for a post-screening Q&A. This screening will also feature the short film Fucking Freak by Salamo Manetti-Lax.