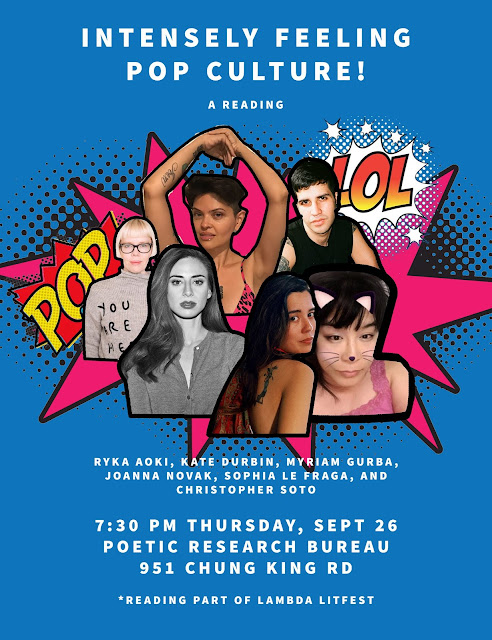 Christopher Soto (b. 1991) is a poet based in Los Angeles, California. He works at UCLA with the Ethnic Studies Centers and sits on the Board of Directors for Lambda Literary. He is currently working on a full-length poetry manuscript about police violence and mass incarceration.

JoAnna Novak is the author of the novel I Must Have You (2017) and the book-length poem Noirmania (2018); her second book of poetry, Abeyance, North America, will be published in 2020. Her writing has appeared in publications including The New York Times, The Paris Review, the Washington Post, Slate, Salon, and BOMB. A founding editor of the literary journal and chapbook press Tammy, Novak is an assistant professor of creative writing at Mount Saint Mary's University in Los Angeles.

Ryka Aoki is the author of Seasonal Velocities, He Mele a Hilo and Why Dust Shall Never Settle Upon This Soul. She has appeared in Vogue, Elle, Publisher’s Weekly, and the Huffington Post, and was honored by the California State Senate for “extraordinary commitment to the visibility and well-being of Transgender people.” She worked with the American Association of Hiroshima Nagasaki A-Bomb Survivors, and two of her compositions were adopted as the organization’s official “songs of peace.” Ryka is the Director of The After School Workspace at Beyond Baroque Literary Arts Center, Head Instructor of Supernova Queer Martial Arts, and Founder of Studio Passoire. She has an MFA in Creative Writing from Cornell University and is a professor of English at Santa Monica College.

Myriam Gurba is a high school teacher, writer, podcaster and artist who lives in Long Beach, California. Her most recent book, the true crime memoir Mean, was a New York Times editors’ choice. Publishers Weeklydescribes her as a “literary voice like none other.” Gurba co-hosts the AskBiGrlz advice podcast with cartoonist MariNaomi. Her collage, digital artwork, and photography has been shown in museums, galleries, and community centers.

Sophia Le Fraga is a poet and visual artist. She is the author of literallydead and I DON'T WANT ANYTHING TO DO WITH THE INTERNET. Le Fraga's ongoing interview series, "Having a Smoke With You," consists of cigarette-long chats with artists and writers. She is a member of Collective Task and the founding editor of @No___Ish, an Instagram zine.

Kate Durbin is a Los Angeles-based artist and writer whose work focuses on popular culture and digital media. Her books include E! Entertainment (Wonder), The Ravenous Audience (Akashic Books), and ABRA (1913 Press). ABRA is also a free, interactive iOS app that is "a living text," which won the 2017 Turn On Literature Prize for electronic literature. In 2015, she was the Arts Queensland Poet-in-Residence in Brisbane, Australia. She has performed or shown her artwork at the Pulse Art Fair in Miami, MOCA Los Angeles, the Haifa Museum in Israel, Transfer Gallery, and elsewhere. Her work has been featured in The New York Times, Art in America, Art Forum,Yale's American Scholar, NPR, The Believer, BOMB, and more.