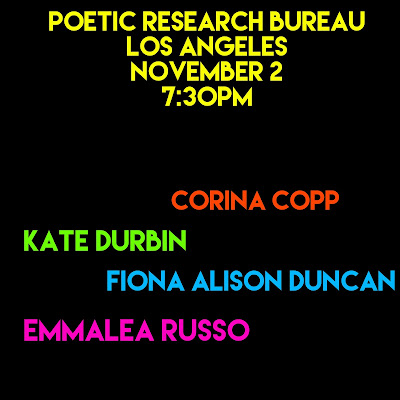 Emmalea Russo’s books are G (Futurepoem) and Wave Archive (Book*hug). She was a writer in residence at the Lower Manhattan Cultural Council and the 18th Street Arts Center, and a visiting writer at the Art Academy of Cincinnati and Parsons School of Design. Recent writing has appeared or is forthcoming in Artcritical, BOMB Magazine, The Brooklyn Rail, Cosmopolitan, Hyperallergic, Los Angeles Review of Books, and SF MOMA's Open Space. She is a practicing astrologer and sees clients, writes, and podcasts on astrology and art at the Avant-Galaxy.

Kate Durbin is a Los Angeles-based artist and writer whose work focuses on popular culture and digital media. Her books include E! Entertainment (Wonder), The Ravenous Audience (Akashic Books), and ABRA (1913 Press). ABRA is also a free, interactive iOS app that is "a living text," which won the 2017 Turn On Literature Prize for electronic literature. In 2015, she was the Arts Queensland Poet-in-Residence in Brisbane, Australia. She has performed or shown her artwork at the Pulse Art Fair in Miami, MOCA Los Angeles, the Haifa Museum in Israel, Transfer Gallery, and elsewhere. Her work has been featured in The New York Times, Art in America, Art Forum, Yale's American Scholar, NPR, The Believer, BOMB, and more.

Corina Copp has translated two texts by Chantal Akerman, the memoir, My Mother Laughs (The Song Cave, 2019), and the play, Night Lobby (e-flux, forthcoming). She is the author of the poetry collection, The Green Ray (Ugly Duckling Presse, 2015), among other chapbooks; and other writing can be found soon or now in America: Films From Elsewhere (Shoestring Press, 2019), Film Comment, Frieze, BOMB, and other publications.

Fiona Alison Duncan is a Canadian American writer, artist, and organizer. She is the founding host of Hard to Read and Pillow Talk. Duncan's debut novel Exquisite Mariposa was just released with Soft Skull Press.
Posted by Joseph at 4:40 PM