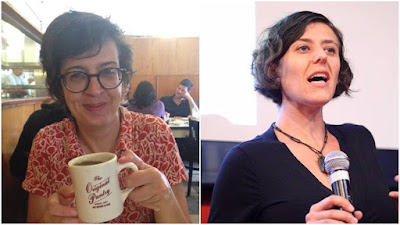 Angélica Freitas is the author of two books of poetry, Rilkeshake (Rilke Shake) and Um útero é do tamanho de um punho (The uterus is the size of a fist), chosen best book of poetry in 2012 by the Associação Paulista de Críticos de Arte. Her graphic novel, Guadalupe, was illustrated by Odyr Bernardi. She has also collaborated with artist Nuno Ramos and musicians Juliana Perdigão and Vitor Ramil. Freitas's poems have been published in Poetry and other magazines internationally. She lives in São Paulo, Brazil.

Hilary Kaplan is the translator of Rilke Shake by Angélica Freitas, which won the National Translation Award and the Best Translated Book Award in 2016. Her most recent translations are Marília Garcia's The Territory Is Not the Map, and 46750, a collaboration between photographer João Pina and poet Viviane Salles. Ms. Kaplan has contributed to Granta, Modern Poetry in Translation, and BBC Radio 4. Her other translations include Paloma Vidal's short story collection, Ghosts, and poems by Ricardo Domeneck and Claudia Roquette-Pinto.
Posted by Joseph at 1:26 PM